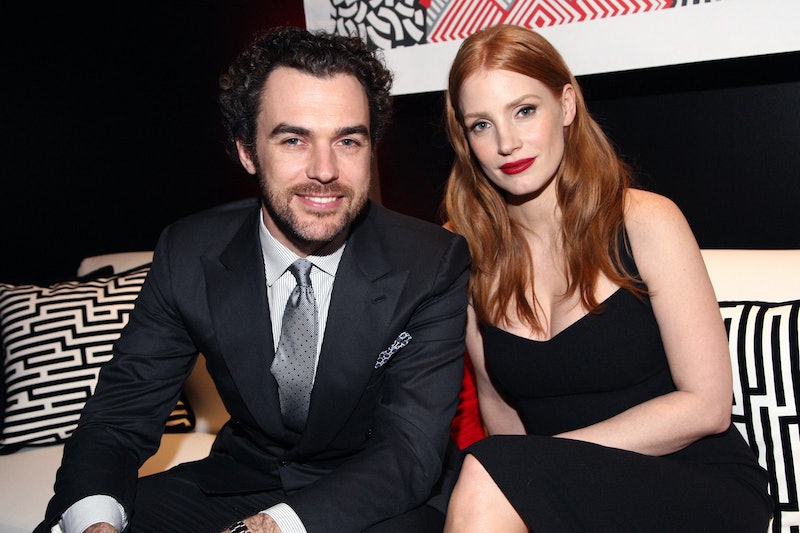 Congratulations may be in order for Zero Dark Thirty star Jessica Chastain. According to People and E! News, Chastain and Gian Luca Passi de Preposulo reportedly got married in Italy on Saturday. A rep for Chastain could not be reached by Bustle at the time of publication. The 40-year-old actor has been dating the Italian businessman for around five years, and while they keep their relationship private, they have on occasion shared their love on social media.

People reports the couple tied the knot at Passi de Preposulo's family estate in Italy. A pre-wedding party is said to have been thrown on Friday night with celebrity guests Anne Hathaway, Emily Blunt, and Chastain's Zero Dark Thirty co-star Edgar Ramirez reportedly in attendance. On Valentine's Day, the actor posted a sweet note to her fiancé on Instagram that read simply, "Some things are worth the wait."

It should also be noted that Passi de Preposulo is an actual count, which means Chastain could technically be a countess now. While it would be an honorary title, it would still be pretty cool. The businessman comes from a super wealthy and famous family, but he works in the fashion industry. He was even profiled by Vanity Fair in 2009 for a series about accomplished heirs.

Even though the duo rarely discuss their relationship publicly, Chastain revealed how happy she was with her beau way back in 2013. In an interview with Extra, the actor said,

"I am very, very happy. It's a wonderful thing when a career does so well and your personal life goes so well."

I know I join Chastain's many fans in wishing the star nothing but happiness as she embarks on this new life adventure.