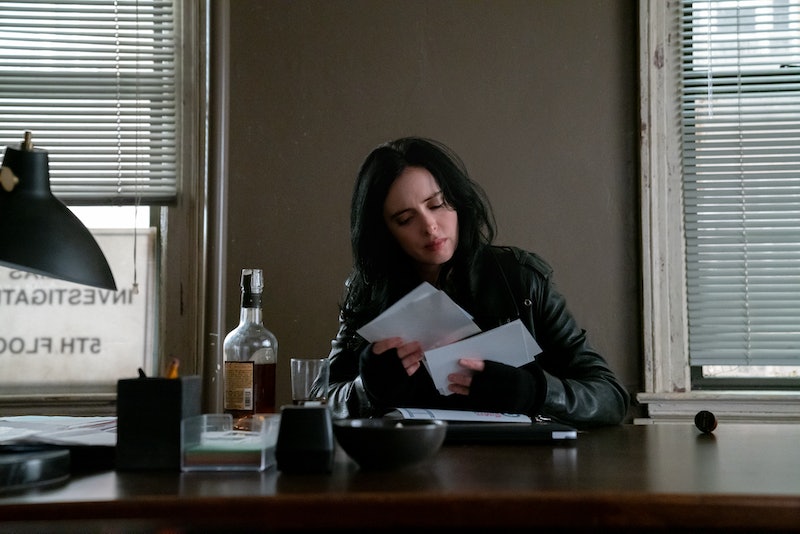 She’s back for more whiskey drinking, man throwing, and crime solving in New York City. Jessica Jones Season 3 drops on June 14 for another round of hero drama from everyone’s favorite reluctant heroine. Fans are ready for another epic season, but it feels bittersweet this time around because Jessica Jones won’t return for Season 4, per TV Line.

The show’s cancellation by Netflix was announced back in February and, while it was sad, it certainly wasn’t a shock to Marvel fans. The streaming service had already cancelled Daredevil, Iron Fist, and Luke Cage and there was speculation that the shows would end up on Disney’s streaming service. But, Variety reported that there was a clause in Marvel’s deal with Netflix that prevents the characters from appearing in any non-Netflix TV show or film for two years after their partnership ends.

So, if Jessica Jones ever gets a Season 4, then it means it will be a long wait for fans. Luke Cage and Iron Fist were both left with cliffhangers at the end of their second seasons, so thankfully the creative team for Jessica Jones is being given a chance to properly wrap up her arc.

And, there’s a lot for fans to look forward to in Jessica Jones final season. Last season, Trish discovered that she has powers of her own, which actually ties to her comic persona Hellcat. It will be interesting to see how she approaches being a person with special powers vs. Jessica’s approach and what that means for their already strained relationship.

Jessica seemed to give up her vigilante life for a shot at being normal with Arocho and his son at the end of Season 2 but obviously she gets back into her groove once again. After all, there's no way to have a third season if Jessica tries to be totally normal, right? She’s been through a lot of trauma so hopefully she can get a solid ending to wrap up her storyline. But, according to the Jessica Jones Season 3 trailer, it’s not going to be an easy feat.

Jessica Jones goes head to head with Gregory Salinger (a version of Foolkiller from the comics), a new enemy who might be her biggest challenge yet. He’s extremely smart, manipulative, and determined to end Jessica’s life. He taunts her with phone calls that make her question who she is and sends bloody money to her workplace. Trish is all about teaming up to go after him, but Jessica isn’t down for working with her sister. Of course, Jessica is tossing everything in her path and determined to bring Gregory down. It’s the type of dark and gritty action that makes fans want to binge every episode in one sitting.

Jessica Jones may never return for Season 4, but the powerful investigators final stand will hopefully give faithful viewers the epic ending that they deserve. And, perhaps Jessica will return somewhere else in the MCU in a few years for more action.