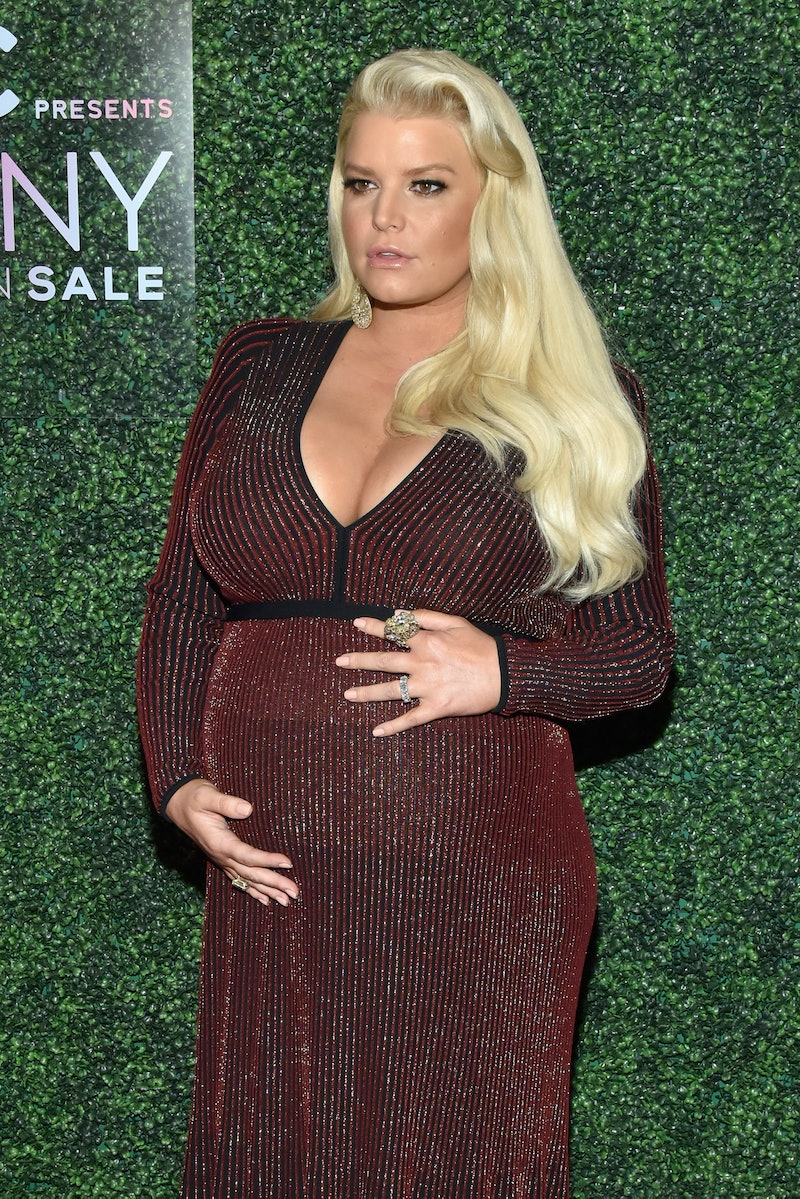 It may not be officially official, but it sure seems like Jessica Simpson revealed the name of her third child at her baby shower on Jan. 19. The soon-to-be mother of three shared several photos from the shower that all had the word "Birdie" in the caption, heavily hinting that's the name she's chosen for her baby girl with husband Eric Johnson.

Along with a photo of with her sister Ashlee Simpson Ross, her mom Tina Simpson, her daughter Maxwell, and Ashlee's daughter Jagger, the singer wrote, "Birdie's Nest." She also shared another photo with daughter Maxwell using that same caption. Simpson even captioned a solo photo of herself, "Birdie Beauty." So the baby's name has to be Birdie, right?

If you're not yet convinced, there were plenty of other clues. According to E! News, Simpson had a neon sign at the shower that said "Birdie's Nest" written in script, which can be seen in the background of her IG photos. What a cute play on words. A source also told Us Weekly that the shower guests made origami birds and wrote messages to the baby. Another strong hint that the family will be welcoming a child named Birdie Johnson into the world soon, right?

Meanwhile, People shared a photo of Simpson's baby shower menu. The menu read, "A little Birdie told me." As in Birdie Johnson? Most likely. The trend continued with the menu asking the shower guests to "stuff your beaks." Basically, this bird theme was very prevalent.

On top of that, a source claimed to Entertainment Tonight that Birdie is a family name, although it's unclear if it's a Simpson or Johnson family name. That same person shared, "She just loved the name and thought it was so sweet."

She's not the only celebrity who thinks the name is sweet. WWE wrestler and Total Divas cast member Brie Bella gave birth to her daughter Birdie in May 2017. Actor and Busy Tonight host Busy Philipps has a daughter named Birdie too. Although Simpson has the celebrity stamp of approval, some fans are a little hesitant about the name choice.

An Instagram user wrote on Simpson's post, "You copied Brie Bella's baby name." Another commented, "Please tell me that poor baby is not going to be named Birdie." Someone else told the singer, "Please don't name the girl Birdie." Meanwhile, one commenter wondered, "Is she naming her daughter Birdie?"

But despite any criticism and skepticism, ultimately it's her decision to make. Plus, it's worth noting again that Simpson hasn't confirmed the name officially. (Even though the captions, baby shower decor, and menu all centered on the word "Birdie" sure hint at that being the pick.)

It was back in September 2018 that Simpson announced her third pregnancy, but she hasn't disclosed her actual due date yet. Even if her fans will be in suspense waiting for her to give birth to baby number three, at least the name won't be (that much of) a mystery. It pretty much has to be Birdie, right?