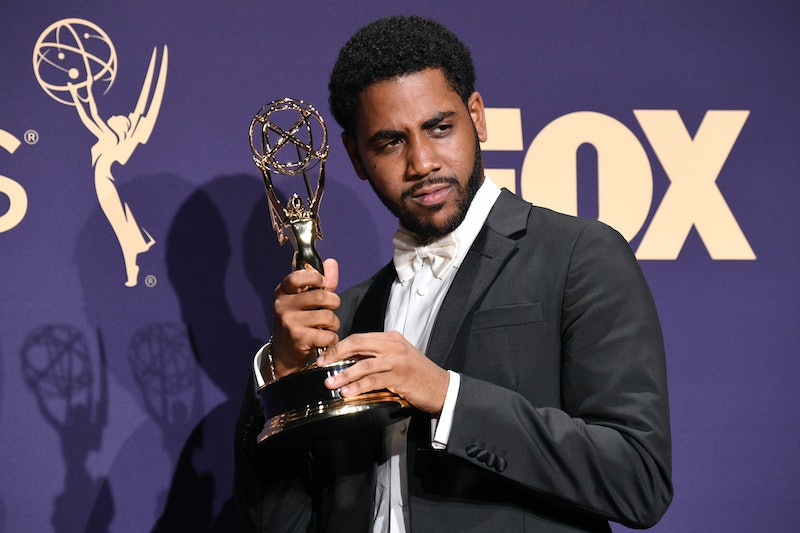 History was made at the Emmys on Sunday, Sept. 22, when Jharrel Jerome became the first Afro-Latino to win an Emmy for acting. The rising star took home the award for Outstanding Lead Actor in a Limited Series or Movie for his role as Korey Wise in When They See Us, Ava DuVernay's widely acclaimed Netflix mini-series about the Exonerated Five. And after he accepted the trophy on the Emmys stage, Jerome had a lot to say in the press room about the importance of his win.

"It's an honor. It's a blessing, and I hope this is a step forward for Dominicans, for Latinos, for Afro-Latinos," Jerome told reporters backstage about the distinction of being the first Afro-Latino Emmy winner for acting, as reported by Entertainment Tonight. "It's about time we are here." As noted by the outlet, he was the only Hispanic winner of the night. And, as reported by CNN, he also made history as the youngest person to win the Lead Actor in a Limited Series category.

When They See Us focuses on the Exonerated Five — Kevin Richardson, Antron McKay, Raymond Santana, Yusef Salaam, and Wise — who spent seven to 13 years in prison after being pressured into falsely confessing to the rape and assault of Trisha Meili in 1989. The five men attended the Emmys as guests of DuVernay, and gave a big standing ovation when Jerome was announced as the winner.

In the series, Jerome was given the unique challenge of portraying Wise as both a teenager and an adult — he was the only actor to do so — which made him stand out to critics. "I feel like I'm on the basketball team and I made that final shot and they’re in the back," Jerome told reporters backstage of having the Five there to see him win. "I felt like I was in a championship game, and we went through our final hurrah. Thirty years ago, they were sitting in a prison cell, falsely incarcerated, and today they’re in suits styled by designers for the Emmys."

After his historic win, Jerome was also asked about the phenomenon of people of color only winning major awards for acting when they play roles that depict their community's struggles (like the Oscar-winning 12 Years A Slave). "Unfortunately, I think our strongest stories are the stories of pain, considering that’s what we go through on a daily basis," he responded. "Our pain needs to be told, so if it has to be for the next 20 years we're just painfully telling our stories until we move on, then it has to be."

Jerome has a few upcoming projects in the works, including Season 3 of Mr. Mercedes and Concrete Cowboys, a movie co-starring Idris Elba, but hopefully he'll be getting other opportunities soon. “The world is his oyster," DuVernay told The Los Angeles Times of Jharrel when their miniseries first premiered. “But he lives in a world that doesn’t see him in the same way it sees Ansel Elgort or Timothée Chalamet. My highest hope is that the industry rushes to his talent.”

After his historic win, maybe the industry will finally get the message.