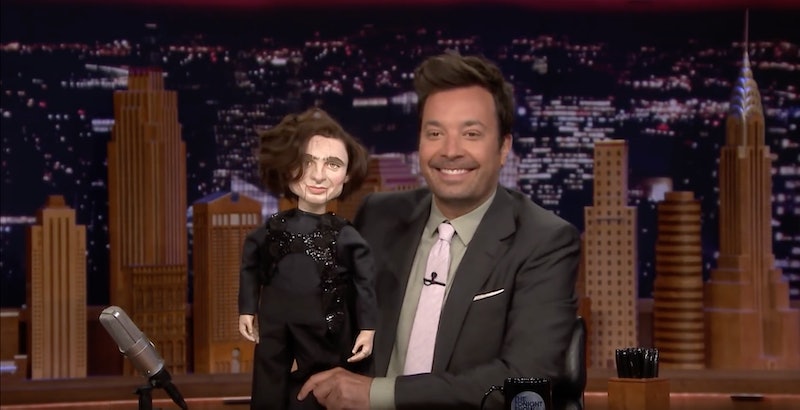 In case you have absolutely no clue what's happening, here's a refresher. In June 2019, a very detailed ventriloquist doll modeled after Chalamet, wearing a replica of the Louis Vuitton-designed harness get-up that he wore to the 2019 Golden Globes, went on sale on eBay, with an enormously high starting bid of $122,795.

Immediately, social media users around the world freaked out about the doll, with fans debating how much it truly resembled the actor. While some people (kind of) seriously wanted it for themselves, most people were just completely terrified and afraid that it would haunt them in their sleep. To absolutely no one's surprise, there was no Timothée super fan that wanted to call the doll by their name, as the listing didn't even attract one single bid.

The description of the unique item reads, in part:

"You are bidding on a one of a kind, handcrafted Timothee Chalamet ventriloquist figure, dressed in a recreation of the Louis Vuitton outfit worn to the 2019 Golden Globes, complete with beaded and sequined harness. Head, hands and ankle boots were all hand sculpted and wardrobe was custom made."

The seller added that it "makes a perfect gift for any occasion, from baby shower to bar mitzvah! Sorry, due to the very low price on this, stand is not included."

Now, over a month after the doll first horrified the internet and went unsold, Fallon announced that he purchased the doll, and brought it out on his show, much to his audience's happiness and horror. The doll has a French accent — thanks to Fallon's impressive ventriloquist skills — and seems just as sweet and sensitive as Chalamet's Call Me By Your Name character Elio, getting upset over anything he perceives as mockery.

During their "interview," the Chalamet doll discussed his greatest roles and helped Fallon introduce the five books that are a part of his second Tonight Show book club. Later in the show, the doll returned to sing a duet with guest Fred Armisen. And he took the opportunity to express his disapproval over the title of the comedian's new series Los Espookys, saying that he should have chosen a French title rather than a Spanish one. The whole ordeal is joyous, hilarious, and uncomfortable all at once, which is a remarkable feat.

Chalamet hasn't commented publicly on the doll or its appearance on The Tonight Show, but if he's as rational as we think he is, it's safe to say that he's just as creeped out by his mini-me as the entire world is.