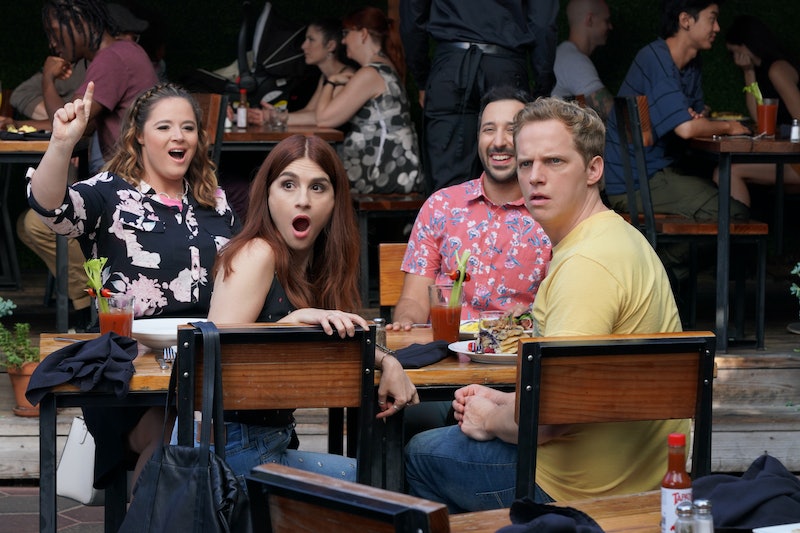 Spoilers ahead for You're the Worst Season 5, Episode 9. The time has finally come for the gang's last Sunday Funday on You're the Worst, which turns into a surprise bachelor/bachelorette party for Jimmy (Chris Geere) and Gretchen (Aya Cash). The episode is an absolute roller coaster of panicked confessions, staged murders, and yeast infections, but it also reveals how well Lindsay (Kether Donohue) and Edgar (Desmin Borges) know the (mostly) happy couple.

For one, the two of them have made everyone T-shirts with their most glaring character trope. Lindsay's says "Walking Hormone" while Edgar's reads "PTS Dummy." Becca's says "Insect with Boobs," Vernon's reads "Carrot Doc," and Paul's is emblazoned with "Alive Roger Ebert." So naturally, the bride and groom are "Emotionally Stunted Ginger" and "Pompous Albino Brit," respectively.

However, it's not immediately clear exactly how perfect the celebration is for Gretchen and Jimmy. For one, Lindsay and Edgar lead them onto a janky party bus, which is decorated with phrases like "Hos & Bros Party Bus 69" and "Wow they're engaged! Give 'em a honk!" Inside, their fellow partiers are waiting: Becca, Vernon, and Paul and his homemade pale ale. The sparse guest list prompts Gretchen to ask, "Where are all my real friends?" to which Lindsay fires back, "Which friends?"

After they stop for some much-needed alcohol at a liquor store, Paul F. Tompkins comes aboard, much to Edgar's chagrin. Although it's later revealed that the whole thing was staged for Gretchen's perverse amusement, the ensuing violence looks incredibly realistic. The comedian heckles everyone in the party bus (which you'd think Jimmy would appreciate, given his own penchant for heckling), causing him and Edgar get into a fist fight. It's jarring to hear the famously nice comedian call everyone "f*ckface," but the man has already kidnapped Edgar's grandmother and forced him to eat a plate of sandwiches for $1,000, so we've already seen his malevolent side. Eventually, Tompkins fake-stabs Vernon in the neck, and Jimmy and Gretchen retaliate by fake-shooting him in the chest (although to the publicist, it's very, very real).

It's then revealed that the whole thing was an elaborate prank for Gretchen's amusement. And for anyone else, this entire night would be a nightmare come to life, but Gretchen is no normal bride-to-be. It's no secret by now that the publicist loves murder mysteries — or have we so quickly forgotten Jimmy's infamous proposal-gone-wrong? So when it's revealed that Edgar and Lindsay orchestrated the whole thing along with Jimmy, it reveals just how perfectly the bachelor/bachelorette party fits their weird, off-beat personalities, and how well the friends behind it know them.

While Gretchen and Jimmy aren't always there for Lindsay and Edgar, their friends are still incredibly loyal to them. Edgar is constantly making breakfast for everyone in the house, reading Jimmy's scripts (although he's scared to give negative feedback, as we learn in this episode), and listening to the author whine about his fairly asinine problems.

Lindsay, too, is incredibly supportive of her best friend. "Lindsay is always giving Gretchen advice from the heart that propels Gretchen to do the next thing," Donohue tells Bustle. She cites Season 2's "The Sweater People," in which Lindsay advised Gretchen to keep her sex life spicy so she and Jimmy wouldn't become complacent in their relationship like she and Paul did. Whether it was the right advice or not, it came from a genuine desire to see her friend happy.

Furthermore, Donohue recalls the Season 2 episode where we first learned about Gretchen's clinical depression. "I think that scene on the bed, where Gretchen reveals how depressed she is, and Lindsay is consoling her on the bed — I think that episode is just like a defining moment of demonstrating why their friendship does last, and why their friendship does work," the You're the Worst actor explains. "Because Lindsay has seen Gretchen at the pits of her despair and doesn't judge her — doesn't walk away."

So if Lindsay knows the most intimate things about Gretchen, it only stands to reason that she can throw her a no-holds-barred, off-the-rails bachelorette party. We keep seeing flash-forwards of Gretchen, and while Jimmy is nowhere to be seen (although this could be some sneaky, reverse psychology on the writers' part), we know that Lindsay will still be there for her. So whether Jimmy and Gretchen stay together or not (which is seeming less and less likely as the show progresses), it's comforting to know that their friends aren't going anywhere.