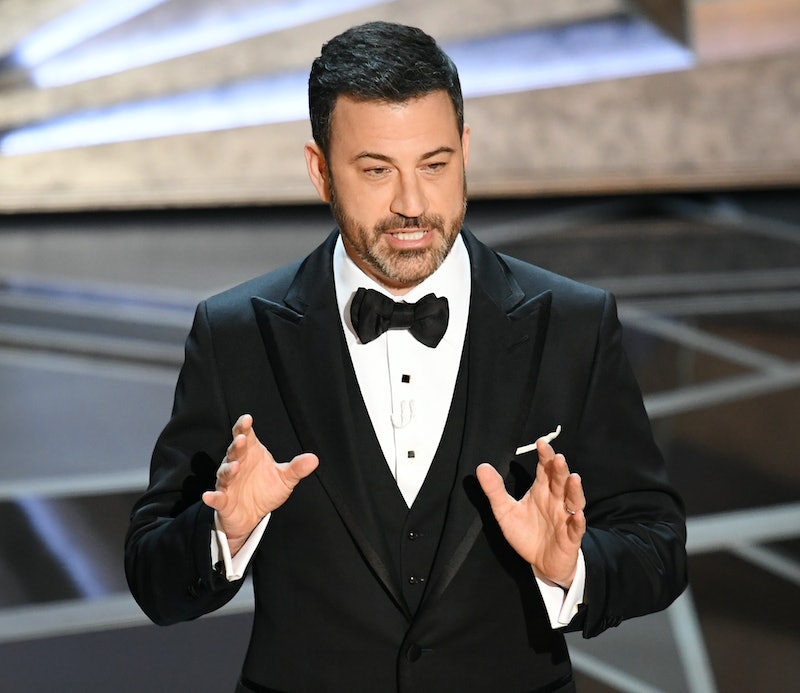 It's the biggest night in entertainment, presumably, and this year it was being hosted by Jimmy Kimmel. Well, if you'd like to know what Kimmel's 2018 Oscars opening monologue was all about, then come on down, because here's a transcript for you. The late night host joked about Envelopegate and the Oscars statue. He even made mention of Harvey Weinstein and the Parkland student protests, just in case you thought this was going to be all laughs and good times. And you wouldn't have been wrong in thinking that it would be nothing but jokes, as early reports claimed that Kimmel wouldn't mention #MeToo during his opening monologue. He proved that wrong so quickly that viewers on Twitter are probably still getting chills.

"Greetings from Hollywood to our viewers all over the world. Thank you for watching. Thank you for having me. It's a great honor to be invited back for a second time," Kimmel began, starting slow by welcoming everyone to another night at the Oscars. "It's a great honor to be here among so many talented women and men. Congratulations to all of you, we made it, we're at the Oscars. Some of you will be going home tonight with an Academy Award. What could be better than that? Nothing, right?"

From there, the magic began and it was glorious. Read the rest of the transcript below.

"Oh, I do want to mention: this year, when you hear your name called, don't get up right away. Just give us a minute. We don't want another thing. What happened last year was unfortunate. I have not told this story in public because I wanted to save it for tonight. But here's what happened. This is true. Last year, about a week before the show, the producers asked me if I wanted to do comedy with the accountants, and I said, 'No, I don't want to do comedy with the accountants.' So then the accountants went ahead and did comedy on their own. And I have to hand it to them, it was hilarious. But it won't happen again.

"This year, the chairman of PricewaterhouseCoopers said, and I quote, 'Our singular focus will be on the show and delivering the correct envelopes.' Which does make sense. Just out of curiosity though, what was your focus the other 89 years?

"I'm hopeful that things will go smoothly tonight. We can't ruin this one. This is a special year. This is a big one. These are the 90th Academy Awards. This is history happening right here. Our friend Oscar, Oscar is 90 years old tonight, which means he's probably at home right now watching Fox News. Of course no, Oscar is here with us. After all the awards for achievements in show business, Oscar is still number one, no question about it. Oscar is the most beloved and respected man in Hollywood. And there's a very good reason why. Just look at him. Keeps his hands where you can see them, never says a rude word, and more importantly no penis at all. He is literally a statue of limitation. And that's the kind of men we need more of Hollywood.

"Here's how clueless Hollywood is about women. We made a movie called What Women Want, and it starred Mel Gibson. Kinda all you need to know. The Academy, as you are no doubt aware, took action last year to expel Harvey Weinstein from their ranks. There are a lot of great nominees, but Harvey deserved it the most. — Oh, that's nice. That's very sweet. I'm sure he'll appreciate that applause. — The Academy kicked him out, and after they did I was curious so I looked it up. You know the only other person to be expelled from the Academy ever was a character actor named Carmine Caridi. In 2004, he was kicked out for sharing screeners. Carmine Caridi got the same punishment as Harvey Weinstein for giving his neighbor a copy of Seabiscuit on VHS.

"But what happened with Harvey, and what's happening all over, was long overdue. We can't let bad behavior slide anymore. The world is watching us. We need to set an example. And the truth is if we are successful here, if we can work together to stop sexual harassment in the workplace, if we can do that, women will only have to deal with harassment all the time in every other place they go.

"Over the course of this evening, I hope you will listen to many brave and outspoken supporters of movements like Me Too and Time's Up and Never Again, because what they're doing is important. Things are changing for the better. They are making sure of that. It is positive change. This is a night for positivity. And our plan is to shine a light on a group of outstanding and inspiring films, each and every one of which got crushed by Black Panther this weekend.

"That's OK. The success of Black Panther is one of many positive stories this year, especially for African-Americans and Bob Iger. Black Panther and Woman Woman were massive hits, which is almost miraculous, because I remember a time when the major studios didn't believe a woman or a minority could open a superhero movie. And the reason I remember that time is because it was March of last year.

"But this year we've got a lot to celebrate. Ceilings have been shattered. Ceilings in screenwriting. We have our first ever female nominee for cinematography, Rachel Morrison, which is historic. So many of tonight's nominees are making history. In fact, if you are a nominee tonight who isn't making history, shame on you.

"Greta Gerwig is the first woman to be nominated for Best Director in eight years. And that's important. Only 11 percent of movies are directed by women, and that is nuts. We still have a very long way to go in that department and a very long way to go with equal pay. Especially when you look at what happened with Mark Wahlberg and Michelle Williams.

"We all know the story: Mark Wahlberg was paid a million and a half dollars to reshoot his scenes, while Michelle Williams, for her reshoots, got per diem. She was paid $80 a day. For the same thing. And what made it especially unfair is that Mark and Michelle are represented by the same agency. And I have to admit this story really surprised me. This one shook me, because if we can't trust agents, who can we trust? To his credit, Mark Wahlberg announced that he would be donating all $1.5 million to the Time's Up legal defense fund. So I guess the ball's in your court, Michelle, what are you gonna do with that $80?

"In the meantime, triple congratulations are in order for the kid from Comedy Central, Jordan Peele, who had a huge success with his movie Get Out. Jordan is only the third person in 90 years to be nominated for directing, writing, and Best Picture for his debut film — and what a debut it was. None other than President Trump called Get Out the best first three-quarters of a movie this year.

"Margot Robbie had a great year, too. Margot scored her first nomination for her portrayal of Tonya Harding in I, Tonya. Whose kneecaps did Tonya Harding have to break to get this dream casting? If they made a movie about my life, best case scenario, I'd be played by Jim Belushi.

"Another exceptionally gifted young actor who's nominated for the first time is Timothee Chalamet. Look at that tux. Are you having fun, Timothee? This is a big deal. Timothee is missing Paw Patrol to be here tonight. Don't worry, Ryder and his team of pups save the day. Timothee is the star of a small, but powerful story called Call Me By Your Name, which did not make a lot of money. In fact, of the nine Best Picture nominees, only two of them made more than $100 million. But that's not the point. We don't make films like Call Me By Your Name for money. We make them to upset Mike Pence.

"Timothee is the youngest Best Actor nominee in almost 80 years, and, on the other end of the abacus, we have our oldest acting nominee ever. The magnificent Christopher Plummer is 88 years old and still going strong. How does Lin-Manuel Miranda compare to the real Alexander Hamilton?

"And once again right here in the front row may be the greatest actor of all time. Meryl Streep is here with us. She has her 23 Oscar nomination. Meryl's film career started in 1977. The longest she ever went without being nominated was from 1992 to 1995, and that's only because those were the years she was in prison. And that I think is amazing.

"The most nominated film tonight, a film that's up for 13 Oscars is The Shape of Water, written and directed by Guillermo del Toro, a wonderful man. Congratulations. I'm very happy for Guillermo, it was a beautiful movie. And thanks to Guillermo, we'll remember this as the year men screwed up so badly, women started dating fish.

"OK, before we start handing out the awards, some history, because we're going to do things a little bit differently. The first Oscars ceremony lasted 15 minutes from beginning to end, and people still complained. So, if you do win an Oscar tonight, we want you to give a speech, we want you to say whatever you feel needs to be said, speak from the heart, we want passion. You have an opportunity and a platform to remind millions of people about important things like equal rights and equal treatment. If you want to encourage others to join the amazing students at Parkland at their march on the 24th, do that. If you want to thank a favorite teacher, do that. Maybe you just want to thank your parents and tell your kids to go to sleep. What you say is entirely up to you, you don't have to change the world, do whatever you want.

"With that said, this is a very long show. So, here's what we're going to do. Not saying you shouldn't give a long speech, but whoever gives the shortest speech tonight will go home with... Johnny, tell them what they'll win! Helen Mirren not included. Why waste precious time thanking your mom when you could be taking her for the ride of her life on a brand new jet ski?

"This is not a joke. I will be timing you. I have a stopwatch. The moment you are handed that Oscar, the clock will start ticking. So get up here, grab it, and go. And, in the unlikely event of a tie, I need to say the jet ski will be awarded to Christopher Plummer. So, let's get the show going."

It was an amazing monologue, and it really set the tone for the rest of the ceremony. Here's hoping that the 2018 Oscars can keep Kimmel's momentum going.

More like this
Someone Must Pay For What Happens To Bad Bunny In 'Bullet Train'
By Arya Roshanian
Christina Perri Reacts To Her 'Twilight' Song Being One Of YouTube's Most-Viewed Ever
By Radhika Menon
At 14, Rachel Sennott Had A Sexual Awakening While Reading 'Twilight'
By Samantha Leach
Jamie Foxx Revealed The Question That Got Cameron Diaz To “Un-Retire”
By Grace Wehniainen
Get Even More From Bustle — Sign Up For The Newsletter