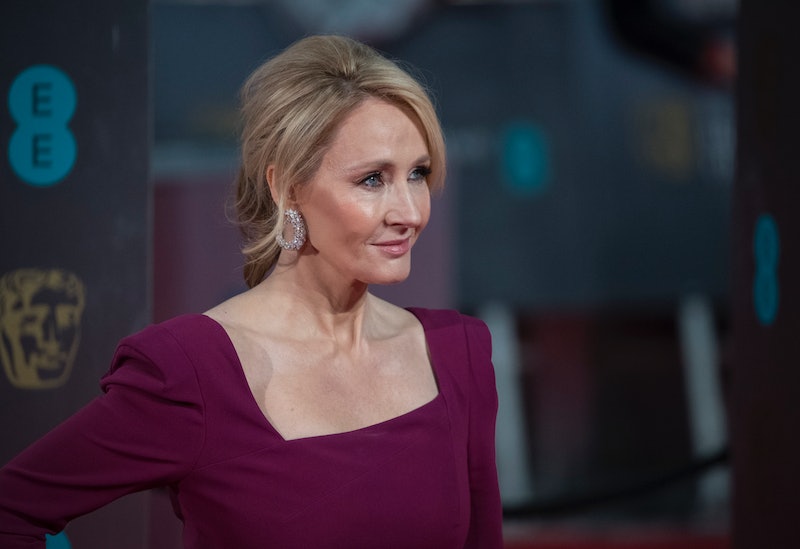 Another day, another witty clapback from J.K. Rowling, aka the Queen of Twitter. If you're one of Rowling's 10 million Twitter followers, you likely know by now that the Harry Potter author has used her magical way with words to deliver some pretty sick burns to numerous trolls on more than one occasion. Her list of brilliant comebacks ranges from a hilarious comparison of Donald Trump and Voldemort, to serving a stellar clapback to a user who took aim at Serena Williams' body. With all of that in mind, it didn't come as much of a surprise when she tweeted in defense of the tennis champ once again on Saturday and perfectly shut down the notion that Williams' recent win at the Australian Open was a result of her newly announced pregnancy.

You may recall Serena Williams basically causing all of social media to have a meltdown earlier this week when she announced on Snapchat that she and her fiancé, Reddit co-founder Alexis Ohanian, are expecting a baby. But even more of a stir was caused when it was revealed that Williams, who is currently 20 weeks pregnant, won the Australian Open while she was with child. Many applauded her after hearing this, arguing that this pretty much cements her position as one of the best athletes in the world. But New Scientist shared a video on Friday that explored whether or not it was Williams' pregnancy that helped her win a grand slam in January — and Rowling was not having it. Granted, the video may have simply been posing a science-based question, but in doing so, seems to dismiss Williams' already top-notch athleticism.

The author retweeted the video, which cites facts and statistics about how pregnancy can potentially boost athletic performance, with a sassy tweet that completely shut down those claims. "The conclusion of this video is 'no'. Call me crazy, but I'm starting to think she's just better than everyone else," Rowling wrote.

I'm going to have to side with Rowling on this one. Not just because that response was brilliant, but also because Williams deserves so much more credit than people are willing to give her. She totally dominated at the Australian Open, not because she was pregnant (though that is an impressive accomplishment in itself), but because she really is one of the best athletes of our time. It'd be great if we could all just admit that she didn't accomplish this because of a special boost in her performance, but rather, because of all of her hard work.