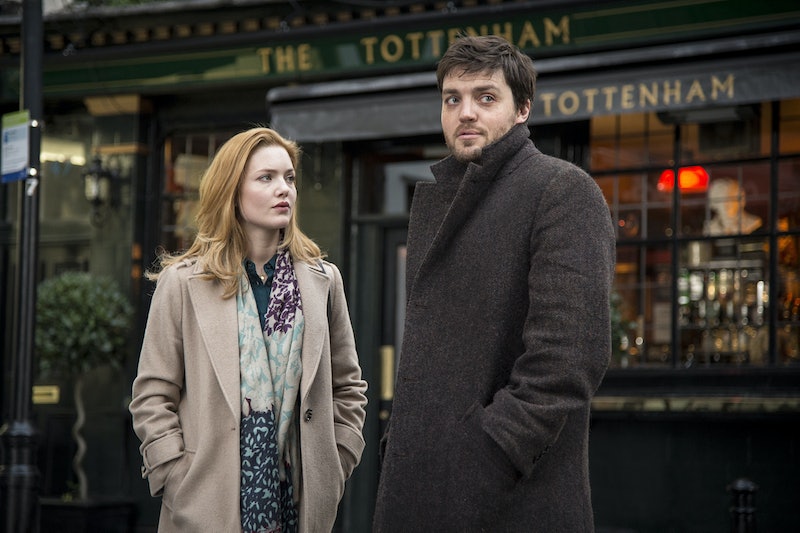 Mystery fans and Anglophiles won't need any additional reason to tune into Cinemax's latest series C.B. Strike when it premieres on June 1. But if you're on the fence about this detective show set in London, there's just one tiny fact that may sway you. C.B. Strike comes from J.K. Rowling and that's an association that will surely entice at least some of the millions of Harry Potter fans out there.

Going by the name of Strike, the series already premiered in the U.K. on BBC One in 2017. But for Rowling's American fans, C.B. Strike premieres on Cinemax on Friday, and it will follow her literary character Cormoran Strike, whom she created using the pseudonym Robert Galbraith.

Some author pseudonyms are better kept secrets than others. And with the astronomical fame that Rowling has due to her Harry Potter books, it's not too surprising that she was unable to keep hers quiet for very long. The Sunday Times revealed that Rowling was really Galbraith in July 2013 — three months after she had published the first book in the Cormoran Strike series, The Cuckoo's Calling. When Galbraith's true identity was revealed, The Times reported that the book jumped to number one on Amazon's bestseller list. Previously, it had only sold around 1,500 hardback copies. "I hoped to keep this secret a little longer," Rowling told The Times. And while she continues to write Cormoran Strike as Galbraith, the cuckoo bird is very much out of the cage.

On the Robert Galbraith website, Rowling explained why she personally chose to use a pseudonym for the Cormoran Strike series and why she continues to use it today. Rowling wrote:

"I really wanted to go back to the beginning of a writing career in this new genre, to work without hype or expectation and to receive totally unvarnished feedback. I wanted it to be just about the writing. It was a fantastic experience and I only wish it could have gone on a little longer than it did. I was grateful at the time for all the feedback from publishers and readers, and for some great reviews. Being Robert Galbraith was all about the work, which is my favourite part of being a writer. Since my cover has been blown, I continue to write as Robert to keep the distinction from other writing and because I rather enjoy having another persona."

Rowling also spoke to NPR in 2015 and explained how she had given the "craggy guy" Galbraith his own "very detailed" biography. "There are certain individuals who helped me in this, and we, together, concocted a CV for Robert Galbraith, who is ex-military and who is working in the private security industry," Rowling said. "And that's why when he produces this novel, he doesn't want to have his face plastered all over his books because he has a day job. And I have to say that little cover worked really remarkably well."

As Galbraith, Rowling has written three Cormoran Strike novels — The Cuckoo's Calling, The Silkworm, and Career Of Evil. (The fourth book of the series, Lethal White, is forthcoming.) With just three books out so far, the TV series currently consists of seven one-hour episodes — three episodes based on The Cuckoo's Calling and two episodes based on the other two books. Each one follows "war veteran turned private detective" Strike and his assistant Robin Ellacott as they solve crimes in modern-day London. Tom Burke portrays Strike in C.B. Strike. And, amusingly enough, Holliday Grainger — whose name sounds an awful lot like Hermione Granger — portrays Robin.

Besides writing the books that the TV show is based on, Rowling also serves as an executive producer on the series. And similar to how she revealed Snape's secret to Alan Rickman for the Harry Potter films, she was active on the TV show based on yet-to-be-released books in the series. "I had input on the storyline, casting, and adaptation because of what I have planned in the future for the characters, but other than that I left it to the great team of experts who have made it all happen," Rowling wrote on her Galbraith website.

Because Rowling plans more Cormoran Strike books, it appears there will be more C.B. Strike episodes. And Rowling confirmed that in an email to USA Today. "Literally, the first time I met Tom, I said, 'I hope to God you do enjoy playing this character ... because I've got at least another 10 books in me!' I absolutely love writing them," she wrote.

Based on that quote, Rowling seems just as passionate about her Cormoran Strike novels as she does about the Harry Potter books. So while C.B. Strike doesn't have the wizardry and spells that come with Harry Potter, you might want to check out these other characters that Rowling so magically created when the series premieres on June 1.