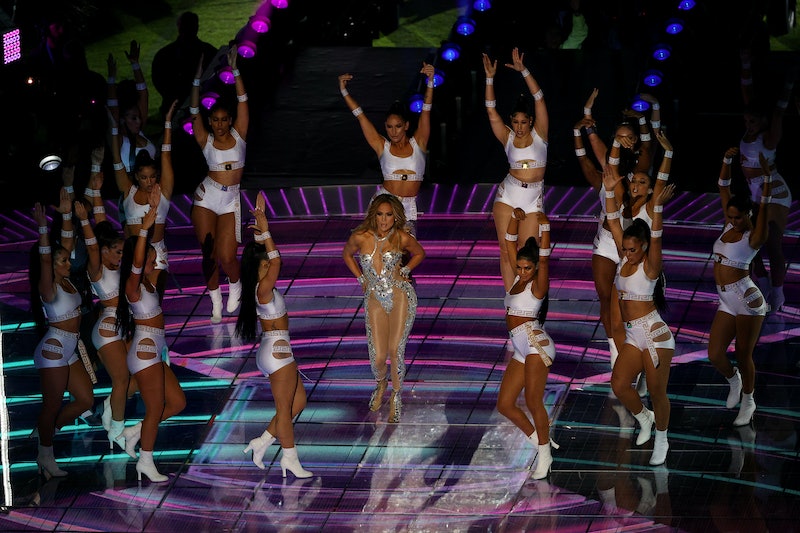 Just like that, the Super Bowl 2020 halftime show has come and gone, and honestly we’re still processing the whole thing. Jennifer Lopez and Shakira promised us an energetic performance full of Latina flavor, and the two megastars delivered on that front. Unsurprisingly, we got several costume changes, with J.Lo alone wearing three separate ensembles, including two different bodysuits: one was a blinged-out leather version by Versace (with matching chaps and thigh-high boots); the other was a full-body glittery sheer number. Her final look of the evening was, you guessed it, another bodysuit. This one was silvery, fringey, and topped off with a Puerto Rican flag cape.

Between the high-energy salsa dancing and Shakira's jam sesh, it’s clear this halftime performance is one for the history books. Yes, previous acts like Beyoncé and Prince are tough to follow, but you've gotta applaud J.Lo and Shakira for putting on a show that just made people want to get up and dance. “It’s like winning the Oscar,” Lopez told Time after being announced as the Super Bowl’s headliner. "It's the biggest show that there is. It has the biggest audience."

Indeed, while nearly 30 million Americans watched the Oscars last year, that number was more than triple that at nearly 100 million for the 2019 Super Bowl. This year’s number is likely to be within that same range. So although J.Lo was snubbed at the 2020 Oscars for her buzzed-about performance in Hustlers, she definitely got the last laugh with a captive audience of about 100 million people or so. Not bad, Jen. Not bad at all.

More like this
Rihanna Tells Us To Shush About New Music In Super Bowl Halftime Show Trailer
By Jake Viswanath
'Breaking Bad' Duo Walt & Jesse Are Back — In This Super Bowl Commercial
By Jake Viswanath
Beyoncé Wore A Golden Sheer Gown At Her VIP Dubai Concert
By Sam Ramsden
Matteo Berrettini & Ajla Tomljanovic Split Shortly After Filming Break Point
By Brad Witter
Get Even More From Bustle — Sign Up For The Newsletter
From hair trends to relationship advice, our daily newsletter has everything you need to sound like a person who’s on TikTok, even if you aren’t.