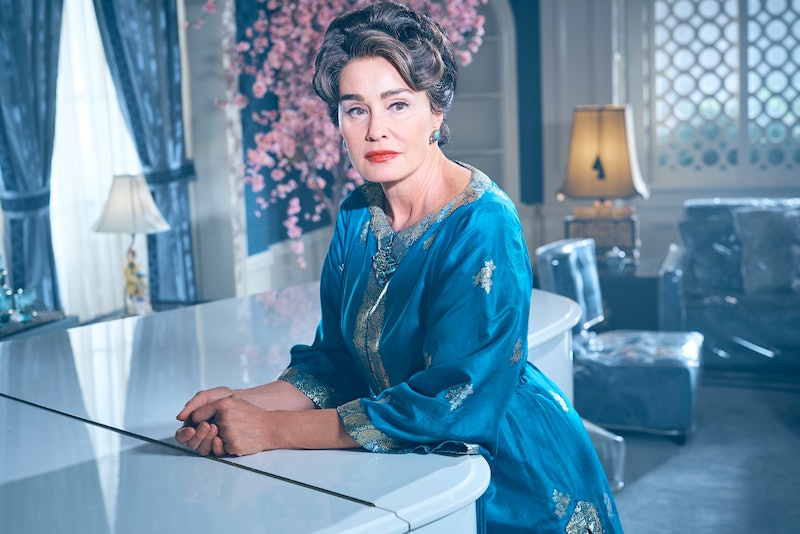 Screen legend Joan Crawford is perhaps best known now more for what happened in her personal life than her acting. And Jessica Lange's Crawford revealed an alleged secret from her past during the March 19 episode of Feud that is worth discussing. Joan Crawford said she allegedly had a sexual relationship with her stepfather on Feud during the episode "Mommie Dearest."

Understandably, this story in Feud will make viewers wonder how true it is and, as often is sadly the case with these kind of stories, it's unclear. The Hollywood Reporter mentioned the rumors that she had slept with her stepfather in a roundup of some of her more prominent love affairs. The book, Joan Crawford: The Essential Biography contained a story of her alleged sexual past with her stepfather almost exactly as Joan described it in Feud. However, in 2002, Variety claimed The Essential Biography was allegedly "written by two fans whose devotion to Crawford is only exceeded by a disinterest in investigative journalism." And the book calls her stepfather Harry (rather than Henry) Cassin. One author of the book Lawrence Quirk has since died and the other, William Schoell gave the following statement to Bustle.

Joan Crawford never made any secret of her abuse at the hands of her stepfather and it was actually mentioned in virtually every book on Crawford ... my co-author, the late Mr. Quirk, actually was a reporter for the Hearst newspapers for many years as well as the author of over 40 books, many on celebrities. (I was also a reporter with the New York Blade and others and have written about 40 books.) Quirk also knew Joan for years and much of the information about her in our book came right from her lips. I met Crawford once and admired much of her work but could not be called a "fan" as such, and while Quirk knew and liked Crawford and her work, their relationship, while friendly, was more professional than personal. Neither Larry nor I were gushing fans, we merely wanted to set the record straight, and interviewed a great many people for the book. As for the Variety review, I think it reflects the critics feelings toward Crawford more than it does an accurate portrait of our book ... Just to clear up the confusion over whether it was Harry or Henry Cassin, Joan's stepfather, Harry is often used as a nickname for men named Henry.

The New Yorker told her childhood story a bit differently and reported that Crawford's second stepfather — Harry Hough — allegedly had sexually assaulted her at age 13. (The writer said that Cassin had treated Crawford well and she went by the name Billie — his nickname for her — Cassin at this time.) With everyone involved no longer living, the truth may never come out, and Feud is a dramatization so it can't be held as fact either.

But, here is the story in the the dramatized FX show: During "Mommie Dearest," Crawford and Bette Davis went out for drinks after a day of filming What Ever Happened To Baby Jane? and they opened up to one another about their mothers. Joan said she was shipped off to convent school by her mother because, at the age of 11, Joan allegedly had sex with her stepfather — her mother's second husband. While Bette was understandably horrified, Joan believed — even as a grown woman in her 50s — that this alleged sexual encounter was not only consensual, but that it had been loving and that she had instigated it.

Joan seemed proud of this alleged affair and defensive of the man who had shown her "genuine affection." However, Susan Sarandon's Bette was right when she said, "You were just a child. Your mother should have kicked him out." Since Joan was just a child during this alleged incident, she did not have the emotional maturity to make that decision. Even if in her mind she "led him into it," the alleged encounter would have been a nonconsensual one and legally, statutory rape. While you could try to explain Joan's blasé attitude about the situation on the fact that it allegedly occurred in the early 1910s, age-of-consent laws have been around since the 1200s. The age of 11 has always been deemed too young for sexual encounters in the U.S. and Slate reported that in America in the early 20th century, the age was appropriately bumped up to 16.

If the idea that Feud presented of Joan Crawford being allegedly raped by her stepfather at the age of 11 isn't stomach-churning enough, the way her mother allegedly handled it, according to the show, is just as terrible. As one of the main themes of the Feud episode was mothers, Joan's own mother allegedly turning her preteen daughter away, rather than throwing out the man she married who had raped her daughter, is not unheard of, but certainly atrocious. And it's probably one of the reasons Joan was still legitimizing this alleged "relationship" as an adult — at least according to Feud.

While Joan never once used the word "rape" to describe what allegedly happened between her and Cassin, viewers of Feud in 2017 should know that's exactly what it was, whether it happened just in the fictional show or in real life. And as divisive of a character (and real-life person) as Crawford can be, this tragic backstory should make you have empathy for this complex woman.