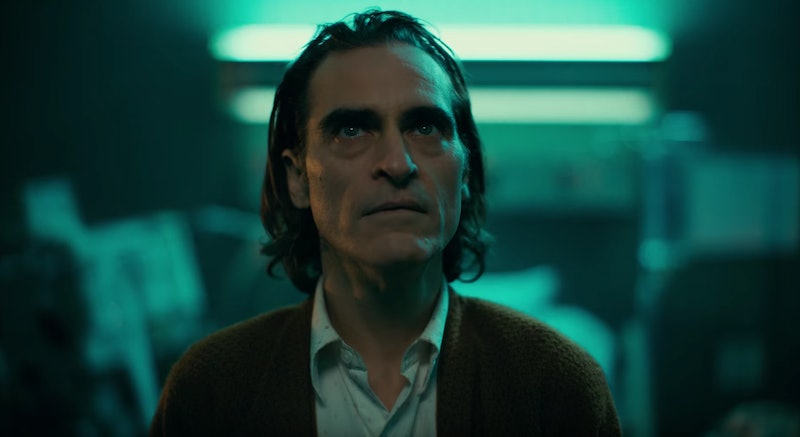 In the current age of superhero movies, it seems as if every comic book character who makes it to the screen is launching their own franchise — and if one actor has his way, the Joker will be among them. During a recent interview with the Los Angeles Times, Joaquin Phoenix revealed that he really wants to make a Joker sequel. In fact, he's been pitching the idea of a follow up to director Todd Phillips since before they even finished the movie.

Phoenix may have been hesitant to sign on to play the iconic DC Comics villain, but he told the LA Times that once he began delving into the psyche of Arthur Fleck, he just wanted to know more. "In the second or third week of shooting, I was like, 'Todd, can you start working on a sequel?'" Phoenix told the outlet. "There’s way too much to explore. It was kind of in jest — but not really."

Though Phillips told the LA Times that there are currently no plans for a Joker sequel, one of the things that Phoenix enjoyed most about the character — which would lend itself easily to more films — is the idea that audiences can't be sure how much of the film is taking place in Arthur's head.

“It’s been super interesting how people react to the movie and what they see — and to me, all of those answers are valid," he said about the various Joker fan theories floating around the Internet. "Normally you have to answer those questions. But this really is participatory and interactive. It’s up to the audience." However, Phoenix did admit that he thinks Arthur is the real Joker, though he's willing to hear any theories that prove otherwise.

This isn't the first time that Phoenix has shown appreciation for the response that Joker and Arthur have received since the film's release in early October. “It’s a difficult film. In some ways, it’s good that people are having a strong reaction to it," the actor told Vanity Fair in October, referencing the backlash that the movie earned for its graphic violence and depiction of mental illness.

Meanwhile, Phillips told the LA Times that people have actually reached out to him after seeing Joker, in order to thank him for his portrayal of someone struggling with mental illness. "I get emails from people telling me that the movie made them look at their sister who suffers from schizophrenia in a different light," he said, describing the audience reception as most "vindicating" part of releasing Joker. "Ultimately, the movie is about the power of kindness and the lack of empathy in the world, and the audience seems to have picked up on that."

For now, though, both Joker fans and Phoenix himself will simply have to wait and see whether that overwhelming fan reaction is enough to inspire a sequel.