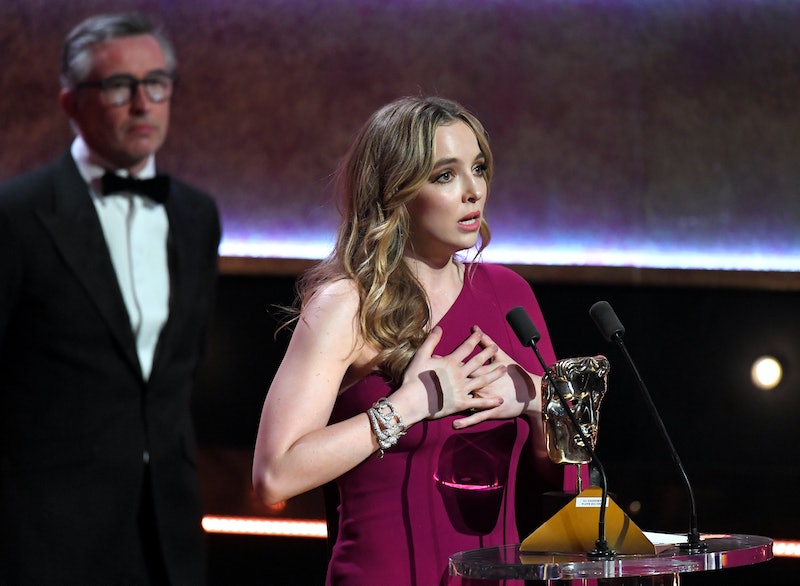 It was pretty much a certainty that Killing Eve would dominate this year's BAFTA Television Awards, but it was still amazing to see Jodie Comer win Best Leading Actress for her outstanding performance as Villanelle. After expressing her gratitude to Phoebe Waller-Bridge and those involved with the production of the show, Jodie Comer thanked Stephen Graham (who was nominated for Best Supporting Actor) for introducing her to their now shared agent.

"Stephen, if I didn't owe you a pint before, I definitely do know," Comer said. "Thank you for the generosity that you showed me all those years ago, and for introducing me to Jane [Epstein]." Most recently, Graham played the intimidating John Corbett in Line Of Duty, but you'll also recognise him from his performances in This Is England and Snatch. He also starred in BBC's police procedural Good Cop in 2012, which is where he first met Comer. Good Cop was one of Comer's first major roles, and as Graham explained to Town & Country magazine last month, he was impressed with Comer's talent and dedication.

"She was up for it. She just wanted to do right by the character. So I went for it, and she went for it, and immediately thought she was fantastic," he said. "[She was] one of those actors who are open to giving everything to that moment with no sense of ego." After performing alongside her, Graham called Epstein and recommended that she take Comer under her wing. "I could see extreme talent," he said. "I watch everything she's in now."

If that wasn't enough to get emotional over, Comer also gave the warmest shout out to her family. She thanked her Mum, Dad, and brother who attended the awards with her for their loving support, and she also dedicated the award to her late Nana who sadly passed away the first week Killing Eve began filming. "And last but not least, bit of a personal one but I'd love to dedicate this award to my Nana Francis," she said.

"[S]he never got to see Villanelle, but she was the life and soul of everything. And when she was here she used to say to me, 'You get it off me, y'know'. And I just wanna stand up here tonight to say Nana Francis, you were absolutely right all along."

She certainly was, especially since not only is Killing Eve coming back for a third series, but Comer will be appearing in two pretty substantial films next year alongside some of Hollywood's biggest names. According to Town & Country, she's already begun filming for action comedy Free Guy with Ryan Reynolds, and as Radio Times reports the actor will also star in Kenneth Branagh's Death on the Nile. Sequel to 2017's Murder on the Orient Express, and will also star Armie Hammer and Gal Gadot.

Comer is definitely becoming one of Britain's most sought-after actors, that's for sure. I'm definitely not the only one that cannot wait to see what future project she will inevitably be involved in.