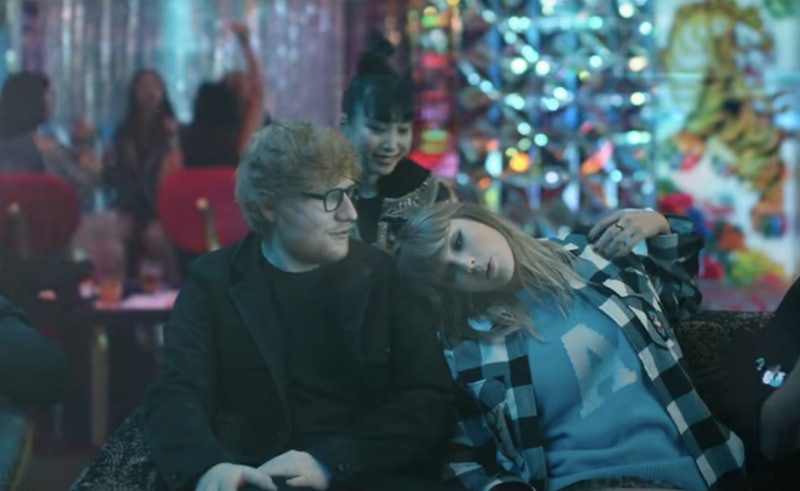 Taylor Swift's new music video is finally here and, yes, there are a lot of Joe Alwyn references in Swift's "End Game", according to her biggest fans. Seeing as T. Swift has been dating Alwyn for about a year, it would only make sense for her to include him on her Reputation album and in her music video. Whether or not the following clues really are about the British actor, Swifties are freaking out, either way.

As you can watch below, the video shows Swift traveling from Miami to Tokyo and then to London, her final destination. She parties it up with rapper Future and her real-life bestie Ed Sheeran, who also contribute their musical talents to the song. There's a lot happening in the video, so if you didn't catch the clues about Alwyn, then here you go.

It Foreshadows Their Marriage

The music video ends with Swift on a London bridge, which to some means Alwyn is "the one" and they are totally going to get married.

His Name Is Spelled Out

There is a sign in one of the Tokyo background scenes that translates to the phonetic pronunciation of "Joe" in Japanese. It's unclear what characters are above that though, and it could be the ending of a longer word.

As Swifties know, in the very sexy song "Dress", Swift sings, "Only bought this dress so you could take it off / Take it off." Well, this individual took the liberty of swapping the "robe" Swift is wearing in "End Game" for "dress". This person seems to be just having some fun with the lyrics, but, hey, it's hard to get past that the video has her romance with Alwyn all over it.

The Meaning Of That "A"

Around the 2:09 mark, Swift is shown wearing a sweater with the letter "A" on it, which could possibly represent the "A" in "Alwyn".

The Clues Are So Obvious

Really, the clues are all there. First of all, she ends up in London, where Alwyn is from. Secondly, she attends a New Year's Eve party in London. For those unaware, many believe the Reputation track, "New Year's Day" is about Alwyn and how she knew he was truly special when they spent New Year's 2016 together. Those references are hard to ignore.

As mentioned above, Swift is spotted wearing a necklace that apparently has the letter "J" on it and is from Tiffany's. She's also been photographed wearing it before. The "J" pendant has to be for Alwyn, right?

Future & Ed Aren't There To Only Sing

Before the video was even released, Swift teased "End Game", which got fans thinking. This person seems to believe that Future symbolizes Swift's former relationships with Calvin Harris and Tom Hiddleston. Then, when she ends up in London, where she is hanging out with her BFF, Sheeran, he is supposed to represent Alwyn.

You can watch the video in its entirety and take in all of the Alwyn references here:

There are also theories that "End Game" is about Hiddleston, but after watching the video and checking out fans' theories, it seems that the song is definitely about Alwyn.