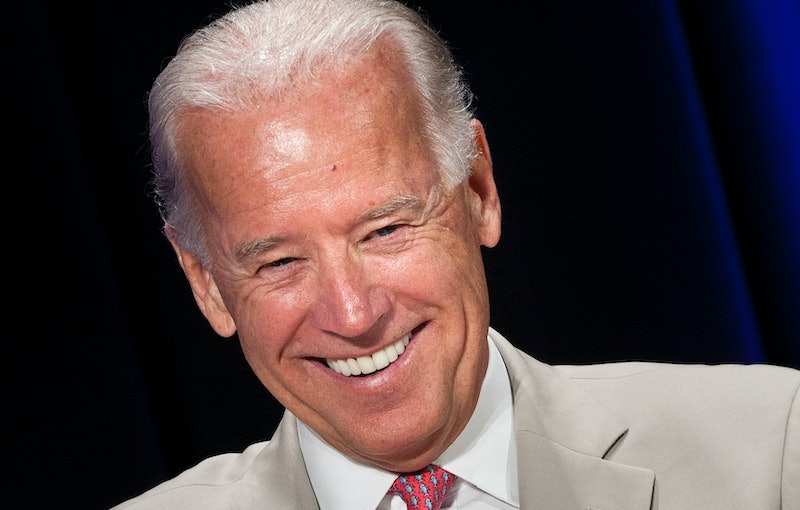 Is Joe Biden dropping hints or has the former vice president simply gotten ahead of himself? A slip of the tongue at a Democratic fundraiser on Saturday night has people thinking Biden accidentally announced a presidential bid. Despite massive speculation about his plans for 2020, Biden has yet to formally launch a campaign.

"I know I get criticized. I'm told I get criticized by the new left," Biden said Saturday while speaking at a Delaware Democrats fundraising dinner held at the Dover Downs Hotel and Casino. "I have the most progressive record of anybody running," he continued, before quickly catching himself. "Anybody who would run," he corrected.

But it was too late. The audience erupted into cheers.

"I didn't mean ...," he trailed off before making the sign of the cross on his chest. "Of anybody who would run!" he stressed. "Because folks, we have to bring this country back together again."

While the former vice president has yet to make an official announcement regarding his 2020 plans, CNN has reported that he's told friends a presidential campaign is "all but certain." According to the cable news outlet, an announcement could come from Biden as early as April.

According to both CNN and The Washington Post, Biden gave Delaware Democrats some hints as to what his 2020 presidential campaign message might be, framing the upcoming election as a "battle for the soul of America."

"Our politics has become so mean, so petty, so vicious that we can't govern ourselves, in many cases, even talk to one another," he said. "It can't go on like this, folks." The former vice president also took aim at Donald Trump, claiming the president "has turned his back on the very people he promised to help."

"Remember how he was going to help the middle class, the cops, the firefighters, construction workers, auto workers, farmers, teachers, home health care workers ... so many folks in places like Delaware, Pennsylvania, Ohio, Michigan, Wisconsin who have been whipsawed by changing world economy and left behind draconian policies of this administration," Biden said, potentially previewing how he'd challenge Trump on the campaign trail.

"Everybody knows who he is," he continued in reference to Trump. "We've got to be clear who we are. We've got to understand that we Democrats, we choose hope over fear. We choose unity over division and we choose truth over lies."

Although Biden reportedly didn't intend to divulge a presidential campaign Saturday, another Democrat did. But Sen. Kirsten Gillibrand's official campaign launch was somewhat overshadowed by Biden's teasing. The New York senator formally joined the pool of 2020 Democratic candidates Saturday with a platform built on calls for gun safety, universal health care, paid family leave, the Green New Deal, and getting money out of politics. "I'm running for president," she wrote in a tweet featuring her campaign's official launch video. "Let's prove that brave wins."