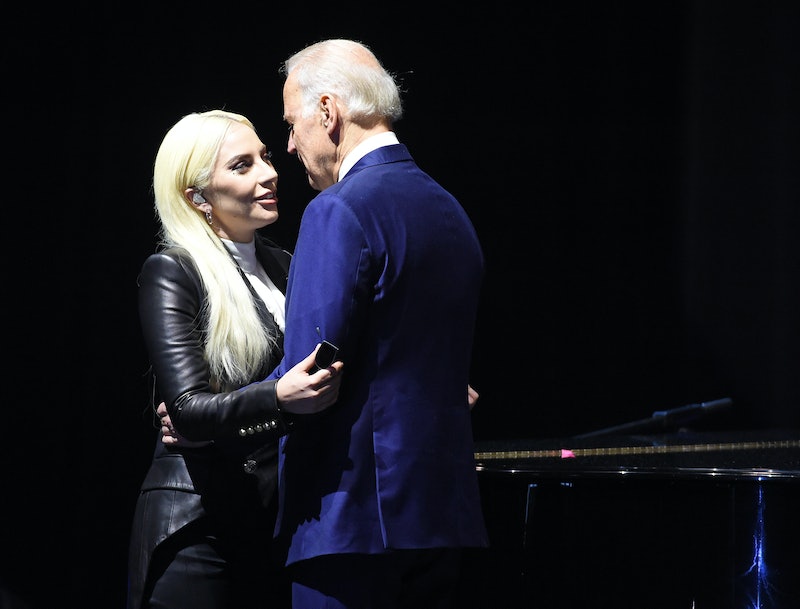 Joe Biden may no longer be in office, but the former vice president still has a thing or two to say about what's going on in our country. Vice President Biden tweeted praise for Lady Gaga's halftime performance at Super Bowl LI, citing their work together on the anti-sexual-assault campaign It's On Us as one of his reasons for adulation of the pop star.

Launched by the Obama administration in 2014, the "It's On Us" campaign aims to address rape and sexual assault on college campuses. Public discussions of sexual assault and the frightening statistics about how often it happens on campuses were still quite new in 2014. This brave White House initiative, headed by then-Vice-President Biden, aimed to confront the issue with frankness and compassion.

Gaga joined forces with It's On Us in 2015, and after her Oscars performance dedicated to the initiative in 2016, the group saw massive increases in pledges. Gaga released a song about campus sexual assault, "Til It Happens To You," featured in the documentary The Hunting Ground. The poignant music video gave a shout-out to the organization at the end, and donated the proceeds from the song's sale to anti-sexual-assault organizations.

Just a few weeks prior to leaving office, Biden spoke at the White House Digital Influencer Summit about how the White House teamed up with creative organizations, campuses, and artists like Gaga to promote the campaign's unique pledge system. Biden's obvious commitment to ending sexual assault caused him to publicly criticize then-candidate Donald Trump following the release of the infamous 2005 Access Hollywood tapes which featured Trump discussing his propensity for grabbing women by the genitals. On Twitter, Biden called Trump's comments "sexual assault" outright.

Like Biden, Gaga is no friend of Trump, but her commitment to ending sexual assault comes from a more personal place. In 2015, the "Bad Romance" singer opened up about her rape at age 19 and how that experience led her to advocate for an end to rape culture. During the same panel where she spoke at length for the first time about her rape, Gaga expounded on what happened to her, and why she is now fighting to help make sure it never happens to anyone else:

I'm here because when I look out onto the sea of beautiful young faces that I get to sing and dance for, I see a lot of people who have secrets that are killing them. We don't want you to keep your pain inside and let it rot like an old apple on your counter, you know? It's like, just get rid of all that trash. Let's get rid of it together.

Though her Super Bowl halftime performance wasn't overtly political, Biden's obvious affection for Gaga serves as a wonderful reminder that there still are prominent people fighting the good fight out there.