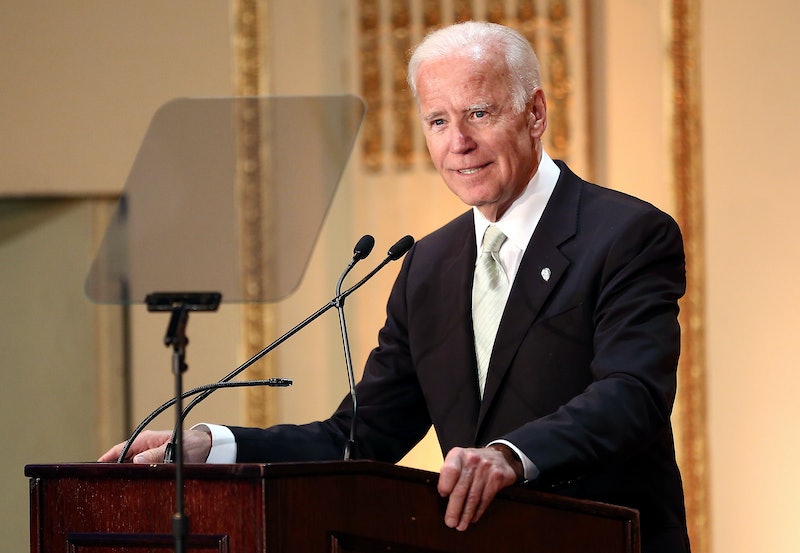 2017 is the year of highly anticipated political memoirs, from Hillary Clinton's What Happened, to the news of Barack and Michelle Obama's book deals. And former Vice President Joe Biden's memoir, Promise Me, Dad, is right there in the top three. As previously announced, Biden's memoir will be hitting shelves on November 14, 2017, and chronicles his experience throughout 2015, which proves to be the most momentous and challenging year in the Vice President's personal and political life.

For 12 months, the vice president balanced his work in The White House with his family obligations, as his son Beau battled brain cancer (Beau Biden sadly passed away in May of that year.) Never far from Joe Biden's mind was the insistent question of whether he should seek the presidency in 2016. Writing with poignancy and immediacy, Vice President Biden brings readers into each moment of his year, the sense of urgency with which he lived, and the experience of both the days when he felt unable to move forward, and the days when he knew that he could not afford to stop.

Now the cover for Promise Me, Dad was has been released and Bustle's got a look at it below.

Following in the trend of Clinton's What Happened cover, the cover for Biden's memoir focuses on a stark background with simple typography, favoring a more traditional look, and banking on Biden's name being all that's needed to catch someone's eye at the bookshop.

And since Promise Me, Dad guarantees to be a moving and illuminating look at Biden's thought processes throughout his penultimate year in The White House, from his emotional reasons behind his choice not to run in the 2016 presidential race, to his mission of keeping his son Beau's legacy alive, we're sure this will be flying off the shelf come November.