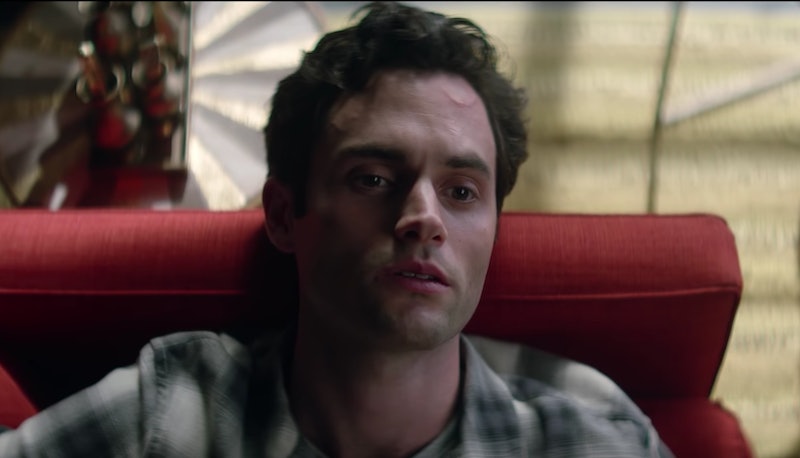 The Netflix show, You, was on everyone's binge-lists ever since it dropped on the streaming site in late December. Of course, part of its initial appeal came from the fact that its leading man, Joe Goldberg, is played by Gossip Girl star Penn Badgley. But don't let the actor's history as a TV heartthrob fool you into falling in love with Joe, because according to Badley himself, Joe from You is actually a rom-com trope gone terribly wrong.

For anyone who's not among the 40 million households that caught You during its first month of streaming on Netflix, a quick summary of the show is that it follows Joe, a lonely book store owner, who stalks Guinevere Beck (played by Once Upon A Time's Elizabeth Lail) just by simply using the social media most commonly used by millennials today.

Needless to say, Joe is a creepy, unnerving character. And while you wouldn't think that a show about a deceitful — and even murderous — stalker plays up rom-com stereotypes, Badgley told Today's Savannah Guthrie and Hoda Kotb that those tropes are actually the core of who Joe is. "I think what he does is he takes the tropes that we've seen in romantic comedies — movies and shows I've been a part of, and many of my colleagues you know what I mean?" Badgley said on Tuesday, Jan. 22. "And it totally subverts them by actually following them closely, and he comes to this kind of terrifying conclusion."

You may have caught that little wink to Gossip Girl as one of Badgley's past works that he mentioned when talking about rom-coms, and it's true that it's hard not to think about the actor's past dreamy character, Dan Humphrey, while watching You now. Without giving too much away, Gossip Girl fans already know that the hit CW show from the late-aughts also included a lot of deceit and manipulation, but nothing from GG was quite as serious as what plays out on You.

In fact, just as fans loved Dan Humphrey, viewers of You are also falling for Joe. Even though, as Badgley said on Today, Joe is "A guy who's capable of a lot of manipulation and abuse," tons of fans online find him irresistibly sexy.

It might be disturbing to see fans fawning over Joe, but to Badgley, that's the whole point of You. As he explained on Today, even though he's responding to fans on Twitter to point out how wrong it is for people to lust over Joe (seeing as he's a murderer and all), he knows that fans are meant to find something about the stalker character attractive. "We're meant to identify with him," he said.

Audiences have become somewhat immune or blasé when it comes to creepy, stalker behavior as long as it's in a rom-com form. What You managed to do was point out just how destructive some of these tropes can be. As noted by writer Ani Bundel in a review of You published by NBC, "Expected, clichéd stereotypes are revealed to be creepy when viewed through the lens of a controlling man like Joe."

As distrustful of social media as you might become after watching You, the rom-com-gone-wrong might make you take another look at some of its predecessors like You've Got Mail in a different way, too.