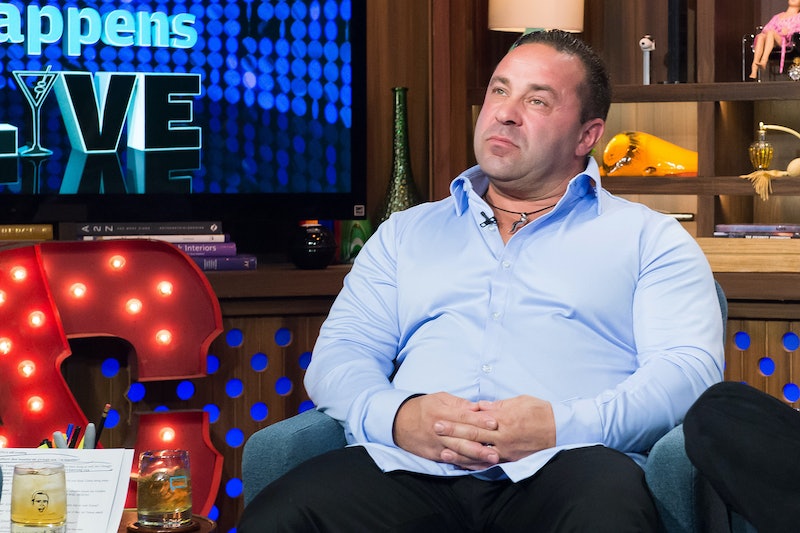 Season 10 of The Real Housewives of New Jersey is kicking off on Wednesday, Nov. 6. And while everyone from last season is returning, of course, the spotlight will be on Teresa Giudice and her situation with husband Joe Giudice. During this season, Joe is still detained following his prison sentence for fraud, but real-time 2019 Joe Giudice updates tell viewers how things turned out.

On Oct. 11, Joe traveled to Italy following seven months of detainment by U.S. Immigration and Customs Enforcement (ICE), as reported by E! News. After serving three years in prison for various fraud charges — he was released in March — Joe was detained by ICE while appealing the October 2018 decision for him to be deported to Italy. (Joe was born in Italy, but moved to the U.S. as a child and didn't become a citizen, which meant that part of his sentence could include deportation.)

At the time, Joe's lawyer, James Leonard, said in a statement to Us Weekly, "He is en route to Italy right now. He spoke to Teresa and [daughter] Gia from the plane and he is extremely happy to be released, more than words can describe. We are still fighting and it is his desire to return home to the United States to be reunited with his family."

Bustle has reached out to Leonard for further comment.

Back in April, People reported that Joe's initial appeal was denied by the Board of Immigration Appeals, which lead him to file another appeal. Joe could have stayed in ICE custody even longer while waiting for the outcome of the latest appeal, but instead requested to go to Italy now, with the possibility that he will end up not being able to return to the U.S.

Joe and Teresa both appeared on a Watch What Happens Live special on October 27, during which Joe explained that he has been living in his grandmother's house in a town called Sala Consilina in Salerno. He also said of the decision to go to Italy, "Sitting in immigration was just a waste of time. You're doing a whole other sentence for no reason in there."

While in Italy, Joe is able to spend time with his own family, but he also met up with Teresa's father, Giacinto Gorga, who lives in New Jersey but visited Joe in Italy, as reported by Page Six. Joe posted photos of himself and Gorga, along with other friends and family on Instagram.

For now, Joe will live in Italy and Teresa will live in the U.S. And, for now, they're still married. On WWHL, Teresa shared that she and the kids are going to visit Joe soon, which will be filmed by Bravo. During their appearance on WWHL, they left it unclear whether they will continue with their marriage if Joe has to stay in Italy. The next step toward that decision could be coming soon: According to E! News, the next court date related to Joe's appeal will be in November.

More like this
Everything To Know About 'RHONJ' Season 13
By Brad Witter and Jake Viswanath
Victoria J. Confirmed Her Divorce With Her 'Bachelor' Casting Announcement
By Grace Wehniainen
This 'Bachelor' Contestant Got Back With Her Bachelor Nation Boyfriend After Going Home
By Grace Wehniainen
These 'Bachelor' Spoilers Suggest Christina Mandrell Is The New Villain
By Grace Wehniainen
Get Even More From Bustle — Sign Up For The Newsletter
From hair trends to relationship advice, our daily newsletter has everything you need to sound like a person who’s on TikTok, even if you aren’t.