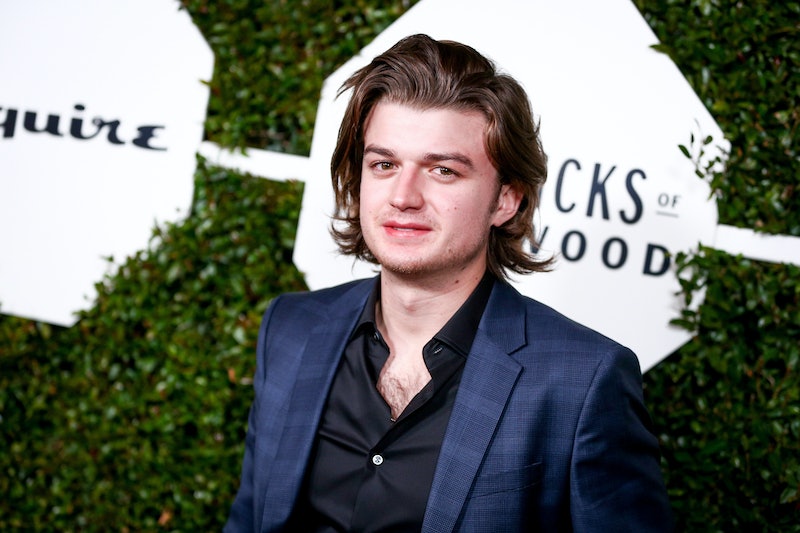 Starting off as the resident jock of Stranger Things, a little bit of a jerk and hellbent on getting Nancy as his girlfriend, Steve Harrington has evolved into a sort of protector — a mom, if you will. But in real life, Joe Keery, the actor who plays Steve, doesn't spend his time fighting monsters from the Upside Down and keeping a handful of tweens out of trouble, and he's not even only an actor, he's also a musician. And even though Joe Keery isn't a part of his band, Post Animal, anymore, he still performs with them form time to time.

Before Stranger Things hit Netflix in 2016, the actor had been playing with the Chicago-based Post Animal since at least 2015, per NME, and recorded on their early EPs and compilations. Keery played guitar and provided some vocals for the band, described as "psych-rock" by the Chicago Tribune in 2016. However, in an interview with Bustle in January 2018, Keery said he left the band due to his acting career.

"It’s important to disassociate Steve from Stranger Things to the band because I think it will eventually hurt the band," he said. "Those guys are such talented musicians." He added that he wanted the band to be known as Post Animal, not as the band with the guy from Stranger Things, saying, "I think it's important that they're hitting the pavement for a while and making a name for themselves and it's not necessarily associated with Stranger Things." That said, he also wouldn't rule out working with the band in the future, admitting that it was just a matter of "finding the time."

In an interview with the Chicago Tribune in December of 2018, the band revealed that Keery appeared on another single and video, “Ralphie,” and also their debut album that was released in April 2018. But, as he said months earlier, he's not really "in" the band and doesn't tour with them. And that became it's own problem, as fans would come to Post Animal shows just to see Keery, only to be disappointed when he wasn't there. "Initially, there were quite a few people going (just) to see Joe play, but he was busy with acting commitments," Matt Williams, guitarist for Post Animal, told the Tribune.

He added that some "heckling" happened, with audience members asking "Where's Steve?," but they'd ignore it, though it wasn't all that easy to forget about. "We played a show in Baltimore, and immediately after our set, the sound guy put on the (Stranger Things soundtrack), and Wes [Toledo, the drummer] just went, 'Seriously? Really, dude? Come on, man.'" They're proud of him, Williams stressed in the interview with the Tribute, but it can be challenging. And, while the band members all appear on good terms, it's clear that Keery's professional focus has shifted a little.

One look at Keery's IMDB page and it's clear, he's got a lot of acting gigs keeping him busy. Over the last year, he appeared in a pizza-themed slasher flick with Chance The Rapper called Slice and was in a short film called How to Be Alone, released in March of 2019 on YouTube. Now he's got Stranger Things 3 hitting Netflix on July 4, and some bigger projects on the horizon, including a role in an upcoming Ryan Reynolds movie called Free Guy. The film will star Reynolds as a "lonely bank teller who discovers he’s actually a background character in an open-world video game," according to Collider. Keery's role is unknown, but he did appear on Reynold's Instagram page in a photo with the actor, so, he's definitely not just a background character.

All in all, Keery's star is on the rise. And while he might be focusing on acting right now, who knows what the future might hold for him musically.