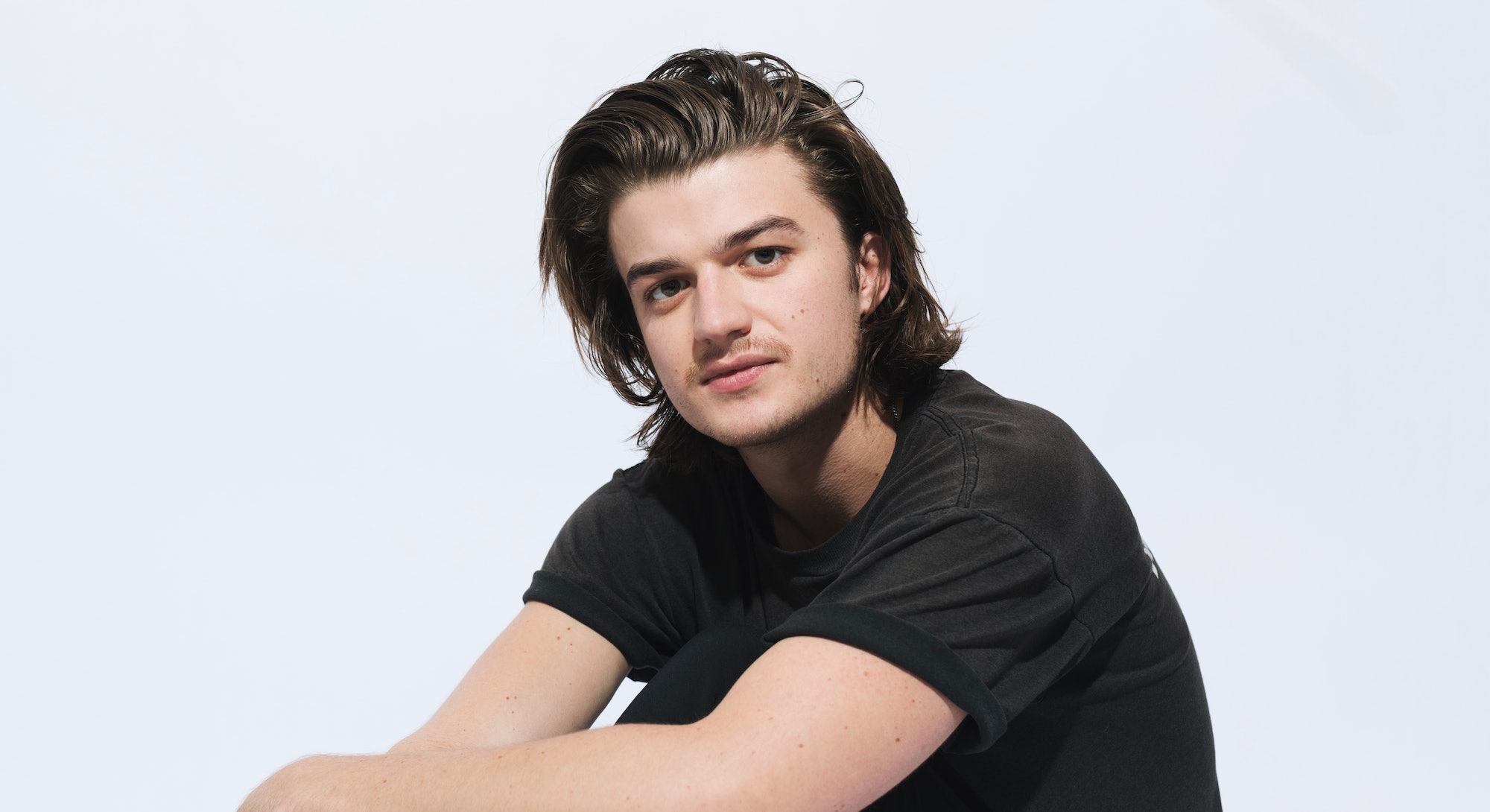 Joe Keery is me. Joe Keery is goooooaaaals. Joe Keery is the best mother to four pre-teen misfits this side of reality. If you've been on Tumblr in the last three months, you probably know Steve Harrington's Stranger Things Season 2 arc has turned 25-year-old actor Joe Keery into a magnet for memeification. He's become someone who can simply pose for a quick on-set snapchat photo with a dog and "champagne" and become synonymous with #goals or do his job well and end up with a Wikipedia page that indicates he's a parent of four (people are just really into this Steve Harrington as surrogate mom to the Stranger Things kids, OK?). But in reality, Keery is just a dude who's trying to figure out how to find time to create music between seasons of the Netflix smash, and who's still puzzled as to why everyone is so obsessed with editing his face onto the cover of the Babysitter's Club books.

"It’s wild, it’s crazy, it’s so weird," he says, speaking to me at Bustle HQ with such genuine disbelief that you'd almost think he'd been body-swapped into the life of a celebrity. "It’s become a lifestyle?" he asks, referring to the viral dog photo (it was originally screen-grabbed from co-star Finn Wolfhard's Snapchat). "This is just me, this is like how I am. It’s like geez, I was just doing it for fun." But as Keery tells it, he probably should have seen this new wave of fandom coming — after all, his mom actually liked his character this season.

"I gauge it by the way my mom reacts," Keery offers with a laugh, when I ask about how fans have received his character. "She saw the first season and was like, 'Man, you were a total jerk, I didn't know you were going to be a jerk.' But, yeah this year, she’s a little more excited that I was, you know, hanging out with kids."

Those kids (and OK, Hopper, too) are a big part of why fans' obsession continues, even into 2018 and awards season. From his funny interactions with Finn Wolfhard on Twitter, to his palpable bond with Gaten Matarazzo (see: this adorable video over on Wired), to his offer to shave his beloved coif if Hopper actor David Harbour won a Golden Globe, Keery's friendly-dude-next-door manner continues to enamor fans long after the initial rush of Stranger Things fever has subsided.

But that memo doesn't seem to have made it to the actor, who doesn't appear quite ready to lean all the way into celebrity. While his co-stars were posing as a lovable crew, debuting new relationships, and donning high fashion at the 2018 Golden Globes, Keery was MIA from the glitzy action. And when we meet, Keery seems more concerned with getting people to listen to one of his favorite bands — a funk band from Michigan called Vulfpeck — than he is about actually hopping in front of the camera; photos are practically an afterthought to stealing a few moments to just chat.

"I think it’s kind of like a 21st century thing. Man, when I was a kid, I didn’t even have a phone — I didn't have an iPhone until I was in college. So, you know I wasn’t taking pictures on the Juke whatever," he says, casually stealing a sip of cold brew iced coffee. (For the uninitiated, the Samsung Juke was a goofy, camera-less candy bar-style phone from the late 2000s.)

Not one for taking dozens of photos for photos' sake (just look at his artsy Instagram feed, which he only updates a few times a month), Keery longs for a time when fans were actually trying to, well, just chat. "I think about Frank Sinatra — sure, he took some photos, but if he’s just walking by in public or something, or like eating at a restaurant, there wouldn't be people trying to take a photo. It would be people trying to meet you."

Of course, Keery's seeming aversion to all things celeb could have something to do with how ardently fans seek out information about the actor — and his co-stars. An incident involving Wolfhard made headlines in November 2017, when he didn't stop for a photo upon leaving his hotel — and it caused Wolfhard and his co-stars to collectively stand up for maintaining a modicum of privacy. Wolfhard later tweeted:

For his part, Keery says fans have even gone so far as to go through his high school friends' Facebook pages and Instagram feeds for photos of Keery before he was famous. The invasive practice — which is the hallmark of "making it" for so many famous people — is forcing Keery into a protective mode, the type of careful privacy one might attribute to, oh, you know, a major celebrity.

"It’s so weird, it definitely makes me a little more hesitant to put myself online or anything like that," he says. "It’s not like I’m just sharing it with my friend, I’m sharing it with a couple million people now. It makes me a little more hesitant, but it also doesn’t make me want to change my outlook for the way that I use it, just as kind of like a fun, funny tool, and not use it as an 'on at 10!' self-promotional thing."

The other reason being a bona fide Stranger Things celebrity might be a little rough for Keery? It means giving up touring and collaborating with his band, Post Animal, as their new record hits this spring while he's living in Los Angeles and filming Stranger Things in Georgia. After all, Google Hangouts "aren't great for jamming."

He explains the scheduling conflicts and missed touring opportunities with a heaviness in his voice — one that carries even more weight than any comments about overly invasive behavior from fans or a distaste for post-airport selfies. And yet, his focus is on his friends in the band and their future, not his own.

"It’s important to disassociate Steve from Stranger Things to the band because I think it will eventually hurt the band," he says, averting his gaze. "Those guys are such talented musicians … I think it's important that they're hitting the pavement for a while and making a name for themselves and it's not necessarily associated with Stranger Things." He adds that there's still hope for the whole band to get back together, "it’s just about finding the time."

When I ask his about his own projects outside of the impending Stranger Things Season 3, he hesitates, mentioning some music he worked on while filming Season 2 (apparently, he lived in a cabin without wifi — casual) and that it will "hopefully" come out soon.

"Hopefully it doesn’t suck," he says with a laugh, "It's almost like I have to put it out there in the universe so in case it does suck, I said it."

And if it does suck — but let's be real, it won't — fans could probably cheer Keery up by simply putting down their cell phones, and asking for a good old-fashioned, Frank-Sinatra-in-a-fancy-1960s-restaurant chat.

Grooming: Erica Sauer using Cicely and Bumble and bumble at The Wall Group