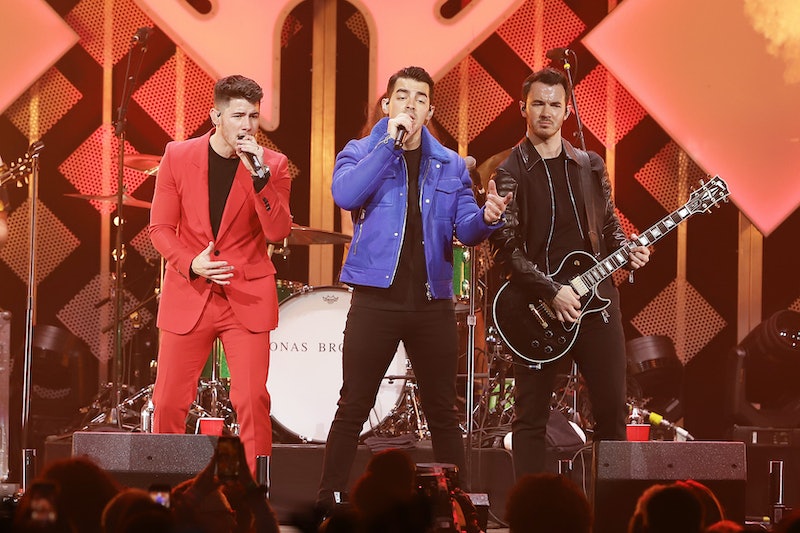 The Jonas Brothers are many things, but did you know they're also Kardashian experts? It appears they've spent some time Keeping Up With The Kardashians, so much so that they've memorized scenes by heart. Joe and Nick Jonas recreated the Kardashians' "Don't Be Rude" fight, and it was almost as iconic as the original moment itself. Even some of the Kardashians themselves lavished it with praise.

On Monday, Jan. 13, Joe posted the hilarious clip on his new TikTok account, along with Twitter and Instagram. Joe assumed the role of Kim Kardashian, who, in a 2008 episode of Keeping Up With the Kardashians, famously crashed through a door, started hitting her sister Khloe with her purse, and repeatedly yelled "Don't be f*cking rude!" The scene ended up being one of the family's most legendary moments, with a legacy of memes and hilarious recreations. When one of the world's other famous families is paying homage to it over a decade later, you know you've done something right.

Joe recreated Kim's moves perfectly as the sisters' dialogue played word-for-word in the background. His victim was none other than his brother Nick, who bravely took on the role of Khloe and had to fight back against Kim's (Joe's) vicious attack. A special mention should be given to the third JoBro, Kevin, who hilariously walks into the frame at the last second and gives a brief but shocked reaction. It's unclear if his appearance was accidental or intentional, but it's perfect regardless (and he makes a great Kourtney).

After Joe shared the video on Twitter, Kim and Khloé both reposted and responded to the clip almost immediately, and they had nothing but love for the expert recreation. "OMGGGG I love you guys!," Kim wrote, complete with many exclamation points for emphasis. Khloé reciprocated and said the boys pulled off their roles perfectly. "I couldn’t love you guys any more!," she said. "Killed it!"

The viral video comes off the heels of the band's latest surprise announcement: they already have new music coming out! The JoBros will release their new single "What A Man Gotta Do" on Friday, Jan. 17, and fans are already buzzing with excitement. But if Joe, Nick, and Kevin mean to ask "What A Man Gotta Do" to impress us, the correct answer would be to make more Kardashian impersonation videos.