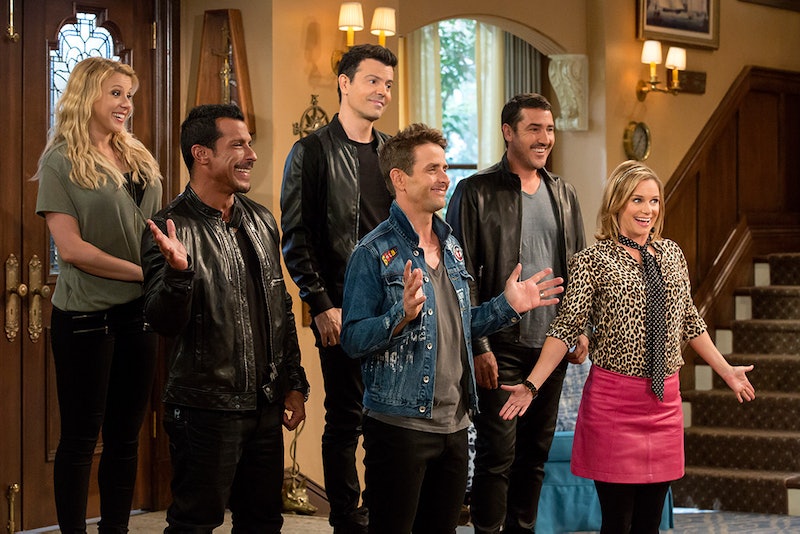 O.G. characters including Derek, Viper, Duane, and Vicky Larson all returned for DJ, Stephanie, and Kimmy's triple wedding on Fuller House, but it was Joey McIntyre's cameo that really brought the show full circle. Amid the numerous things that went wrong on the women's big day, their pastor was asked to officiate an undisclosed "high-profile celebrity wedding," leaving them with only three hours to "find the perfect person to officiate the ceremony." But Danny came through in the clutch, with McIntyre showing up just in time to lead the She-Wolf pack's backyard wedding.

"Dearly beloved, we are here today to marry these three New Kids superfans to their grooms," McIntyre announced, joking that he'd just gotten his online minister's license 10 minutes earlier and was, therefore, "wildly unprepared." He even teared up at the couples' self-written vows. "Wow, and I thought "Please Don't Go Girl" was romantic," he quipped.

Fuller House fans will remember New Kids on the Block's epic Season 2 cameo in honor of DJ's birthday. Following a typical comedy of errors, DJ, Stephanie, and Kimmy all ended up onstage performing alongside the boy band in a decades-in-the-making dream come true. "Back in the day we never did any guest spots, so yeah, it was fun," McIntyre said of the appearance in a 2016 Fuller House featurette.

The women's longtime fangirl-ing was just as present off screen as it was on the show. In the same BTS video, Candace Cameron Bure (DJ Tanner) gushed that she and Andrea Barber (Kimmy Gibbler) go to NKOTB concerts every year. "We did back in the day and we still do today, and so we've been swooning over them forever," she said.

It was a fitting sendoff, then, for the series to end with the ultimate '90s throwback: DJ, Kimmy, and Stephanie's favorite boybander ushering them into the next chapter of their lives.