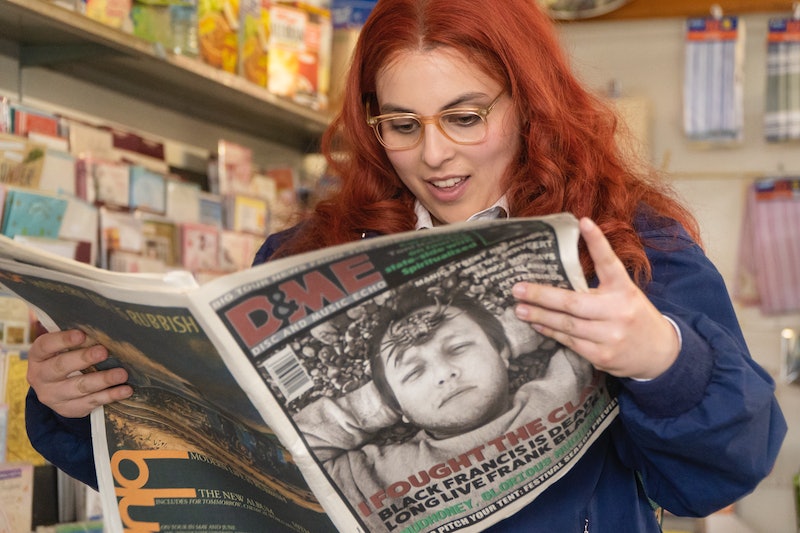 Beanie Feldstein rocked our world as the best friend to Saoirse Ronan's Lady Bird in Greta Gerwig's 2018 coming of age dramedy by the same name. In 2019, Feldstein wowed fans as one half of the lead duo in Olivia Wilde's directorial debut Booksmart. Now, Feldstein is taking the lead in the movie adaptation of Caitlin Moran's book How to Build a Girl, out on digital May 8.

In the film, Feldstein plays a teenager named Johanna Morrigan, a character who isn't exactly a real person, but is loosely based on author Moran herself. Johanna is a 16-year-old girl living with her parents and a gaggle of brothers in cramped public housing in the 1990s. When Johanna wins a writing contest to become the local newspaper's new rock critic, she completely changes her identity and her life into something with a little more flare. Now, as music critic Dolly Wilde, Johanna dresses more flamboyantly, charms strangers with her outgoing personality, and embodies the term "fake it 'til you make it." But Dolly's rise comes with a few face plants along the way, and Johanna must eventually ask herself if she even likes the girl she has built.

Since Moran's first book, 2011's How to Be a Woman, was a full-fledged memoir, one might assume that her second book, How to Build a Girl, would be a true story as well. But as Moran has explained since the book was published back in 2014, How to Build a Girl is only a semi-autobiographical novel. Johanna Morrigan and Cailtin Moran aren't exactly the same person, but much of what happens to Johanna in the book was drawn from Moran's life.

Like Moran once did, Johanna lives on a council estate (the UK's version of public housing) in Wolverhampton in the midlands of England, surrounded by her siblings. Moran also got her start in music criticism as a 16-year-old, writing for a weekly music magazine called The Melody Maker. And much like Johanna, Moran loved to dress in chunky boots, flowy shirts, and top hats as a female version of the Artful Dodger look from Charles Dicken's Oliver Twist.

When How to Build a Girl premiered back at the 2019 Toronto International Film Festival, Moran went into more detail about how much of the character and the story came from her life. "We have arguments about how fictional it is," Moran told Deadline, "but 90% of what you see on the screen is something that happened to either me or a friend, and I then stole that story and put it into the script."

Moran, who wrote the screenplay adaptation herself, also wanted to give teenage girls who might be a little less popular, a little less thin, and a little less confident someone to look too. She was tired at the time, she tells Fashion Magazine, of female-led stories like The Hunger Games and Divergent. "I don’t want to torture girls. I don’t want any more dystopian fiction for teenage girls. I want them to watch a movie where her biggest problem is that she’s kissed the wrong person and she’s been horrible to a couple bands and then she learns from her mistakes."