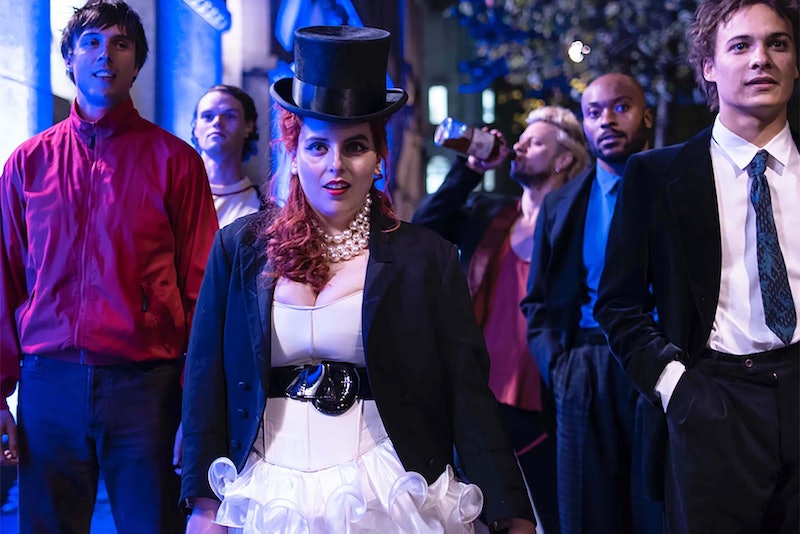 Caitlin Moran's no-nonsense, feminist, and funny tomes are resident in countless bookshelves in the UK and all over the world. So news that one of her most beloved novels, How To Build A Girl was to be made into a film sent Moran stans' hearts soaring. So how can you watch How To Build A Girl in the UK?

As Bustle previously reported, the official UK release date was to be July 3 but it was announced by actor Beanie Feldstein, who plays the plucky protagonist in the movie, that the film was to have a U.S. on-demand release on May 8 due to the COVID-19 outbreak, but British fans were left in the dark as to when they would get to enjoy it. Luckily, it has recently been announced that, as of July 24, UK fans will be able to stream the film online on Amazon Prime.

With the exception of Feldstein in the starring role, this film has more ubiquitous British actors and legends than you could shake a stick at. There's Mel & Sue, there's Alfie Allen, there's Emma Thompson – the list goes on. Irish stars Sharon Horgan and Chris O'Dowd make an appearance too, making up a droolworthy cast before you even get into the content of this much-loved story.

It's the tale of Johanna Morrigan, a young woman from Wolverhampton whose eagerness to get the hell out of dodge and on her way to a new life and the career of her dreams led her down murky paths. Changing her name to Dolly Wilde and becoming an enormously popular, cool music journalist, exploring her sexuality, and London's vibrant party scene she really seems to have it all. But is it really all it seems?

How To Build A Girl is a charming, honest, and heartwarming story not to be missed so roll on July 24. I can't wait.

This article was originally published on April 9, 2020