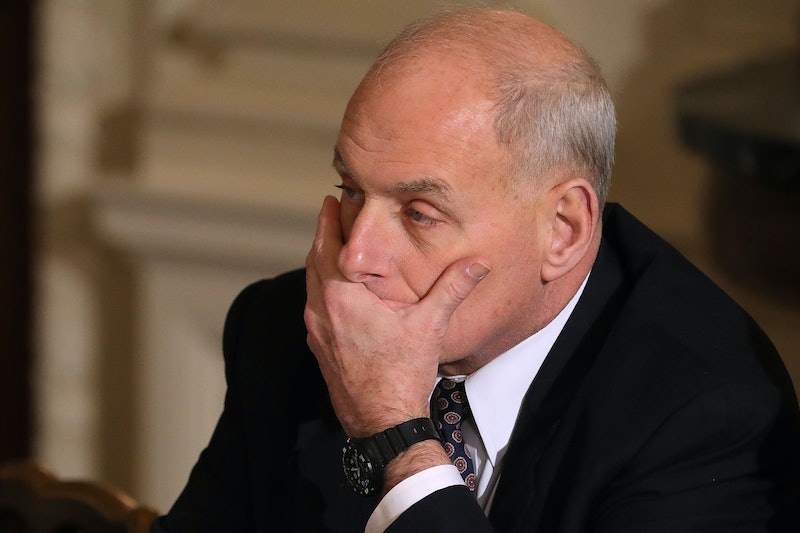 Weeks into the government shutdown, former secretaries of the Department of Homeland Security (DHS) issued a plea asking President Donald Trump and Congress to fund the department. Even former White House Chief of Staff John Kelly spoke out about the shutdown and urged his former boss to take action in a letter sent on Wednesday.

The secretaries argue that, just as Congress has sometimes ensured that the Department of Defense (DoD) had funding before a shutdown, the same should be true of DHS. "Homeland security is national security," they wrote. "With today's threats, there is no longer a distinction between the 'away game' and the 'home game' which is why DHS and DoD work hand in hand to defend our country."

Around 85 percent of DHS workers are either furloughed or working without pay during the shutdown, according to CNN. Among them are around 43,000 members of the Coast Guard, per a NavyTimes estimate, who perform thousands of search and rescue missions a year as well as other duties. DHS' other responsibilities include granting Green Cards and citizenship statuses, leading the country's natural disaster response systems, and investigating human trafficking.

DHS also employs around 20,000 U.S. Immigration and Customs Enforcement (ICE) workers and over 60,000 employees with the U.S. Customs and Border Protection (CBP). Both agencies have been severely criticized recently for escalating ICE raids and for the deaths of multiple migrant children in CBP custody. The Guardian has called Border Control "the largest police force nobody monitors," noting that CBP has twice the number of employees as the New York Police Department but half the number of internal affairs investigators.

In Wednesday's letter to Trump and Congress, the former DHS secretaries criticized the fact that some department employees have had to rely on community assistance to get by during the shutdown (on Tuesday, the Coast Guard commandant stated that some workers have been using food pantries). DHS employees, the secretaries wrote, "should not have to rely on the charitable generosity of others for assistance in feeding their families and paying their bills while they steadfastly focus on the mission at hand. This is unconscionable."

"We are awed by the sacrifices that the men and women of DHS and their families make every day and their extraordinary service to our nation," the secretaries continued.

The letter is particularly notable because Kelly has rarely showed his opposition to the Trump administration. As the Hill notes, Kelly generally declined to criticize the president publicly while he worked in the White House, though news reports sometimes indicated that he denounced Trump in private (NBC reported in April of last year that he called the president "an idiot" several times).

In an exit interview with the Los Angeles Times, Kelly argued that his legacy should be defined by the bad things he stopped Trump from doing. Perhaps the former chief of staff hopes his signature on this letter will help sway the president into ending the shutdown, allowing him to add another item to that list.