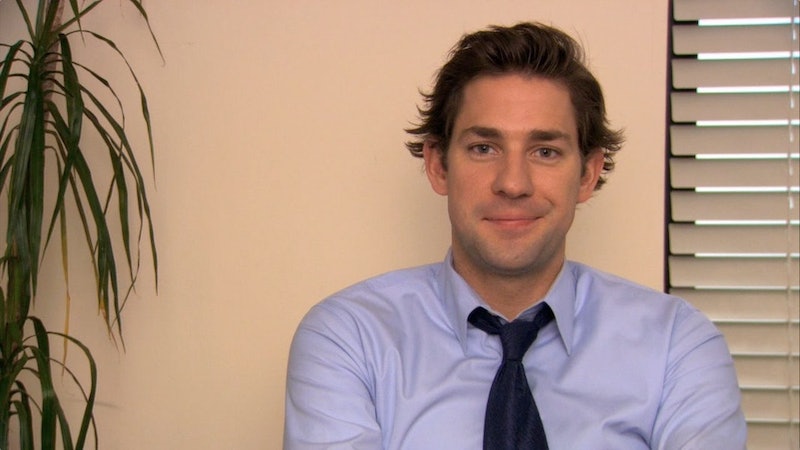 This Office anecdote deserves its own Dundie: Kim Ferry, a hair stylist who worked on set of NBC’s The Office, revealed that John Krasinski wore a wig in Season 3. In an interview with Mashable on July 3, Ferry dished on hair secrets from the set of the workplace comedy — and revealed that at one point, Jim Halpert’s signature shaggy hair was not Krasinski’s own hair at all. At the time, Krasinski had to cut his hair in order to star in the 2008 comedy sport film Leatherheads opposite George Clooney. When Office creator Greg Daniels shut down the actor's request, however, Krasinski enlisted the help of Ferry to pull off the ultimate hair heist: create a wig.

“He paid for the wig — a human hair wig made by a friend of mine, Natascha Ladek, who's the best wig maker in town," Ferry said. "She came in to do a secret little fitting for him, she made the wig, we got it, and it looked amazing.” Later, Krasinski wore the wig to film an episode. After he finished filming, he drove straight to Daniels’ office to pitch the wig once again. Daniels, according to Ferry, kept saying, “No! I would know if you’re wearing a wig.” She said, “So John leaned over the desk and said, 'No I don't think you would.' That's when he ripped it off and shut it down, and we got to do the wig."

Ferry added, “It was worth it cause he really wanted to do that movie and I didn't want to disappoint him. It was nerve-wracking, but it turned out OK.”

The wig didn’t just fool Daniels; it fooled Krasinski’s Office co-star B.J. Novak, too. Ferry revealed that when she arrived at Daniels’ office, she bumped into Novak, who told her, “I just saw John and I feel like we're gonna know if it's a wig or not." Ferry recalled, "I'm thinking like, uh huh. He doesn't know John's wearing it right now, so it made me feel better. And I was like, 'Well, that's interesting.'"

As such, Krasinski wore a wig during the final episodes of Season 3. And, of course, he went on to star in Leatherheads. Set in the 1920s, the film follows the captain of a football team (Clooney) who recruits a war veteran (Krasinski) to play for his team and bring attention to the sport. In an interview with Clooney to promote the film in 2007, Krasinski spoke about filming Leatherheads and Office at the same time. “I was working five days a week on the show and then two days with you,” Krasinski told Clooney. “It’s very hard to be impressed with a schedule of seven days a week when your director had already done it.”

Krasinski added, “I remember a crew member was like, ‘Man, that schedule has to be brutal.’ I was like, ‘It’s all a part of the job,’ and you’re like, ‘Yeah, it is part of the job. We’ve all done it. Now shut up and get on set.’” In any case, it's a good thing it all worked out — fake hair and all.

More like this
At 28, Rosie Perez Risked Her Career To Stop Playing Stereotypes
By Gabrielle Bondi
'Abbott Elementary' Fans Probably Missed This 'Parent Trap' Easter Egg
By Sam Ramsden
Alicia Silverstone Revives Her 'Clueless' Character In This Super Bowl Commercial
By Jake Viswanath
Vanessa Hudgens Is Reportedly Engaged To Cole Tucker
By Jake Viswanath
Get Even More From Bustle — Sign Up For The Newsletter
From hair trends to relationship advice, our daily newsletter has everything you need to sound like a person who’s on TikTok, even if you aren’t.