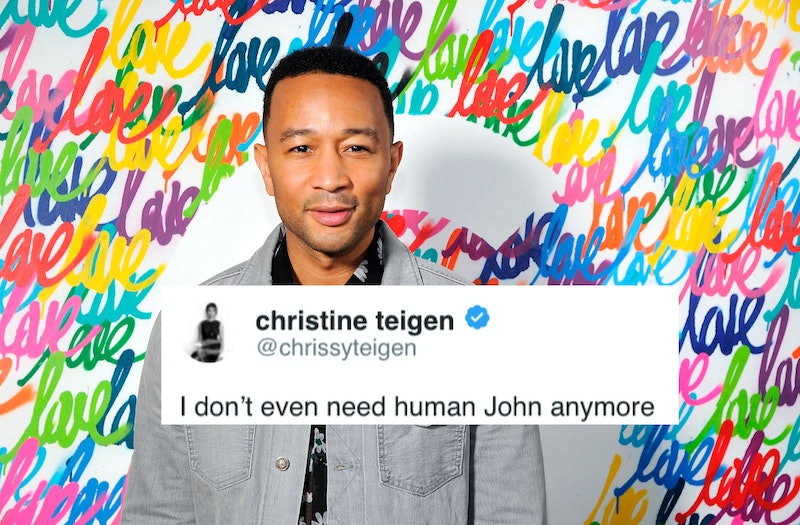 If the thing that’s been stopping you from buying a Google Home is fact that the voice of the Google Assistant doesn’t sound like it’s played Jesus from a production of Jesus Christ Superstar or won any Grammys, time to fork over that $99. At yesterday’s I/O Conference, Google announced that John Legend will lend his voice to Google Assistant, making him one step closer to an EGGOT. (The second and more important “G” stands for Google Assistant Voice, obviously.)

Legend will be one of six new male and female voice options rolling out in the coming year. Google has been working on engineering the AI voices to sound less robotic and more human, according to Google CEO Sundar Pichai. Of course, John Legend is but a human (as far as we know). So, his voice responses will be limited to what he has recorded in the studio. For example, if you ask, “Hey Google, what’s ‘couscous’?” John Legend will respond, calmly but informatively: “Couscous, a type of North African semolina in granules made from crushed durum wheat.” A video of Legend in the recording studio was played at the I/O Conference, also showing him singing Happy Birthday “to the person whose birthday it is.”

So, if you’ve ever wanted John Legend to sing you “Happy Birthday,” Google has just granted your wish. Siri who? Alexa what?

If this all sounds a little familiar, perhaps you’re thinking of the Amazon 2018 Super Bowl commercial. The spot showed Alexa losing her voice and calling in celebrity voice reinforcements like Cardi B, Gordon Ramsay, Anthony Hopkins, and Rebel Wilson. While just a TV commercial goof, Twitter was abuzz with people asking “...but when can this happen, though?”

(Side Note: Amazon reportedly spent upwards of $25 million on their Super Bowl commercials, including a spot promoting the Jack Ryan series coming out of Amazon Studios. Yes, 25 million. Pamela Anderson is worth a reported $5 million. So, for context, Amazon spent five entire Pamela Andersons on their 90 second commercial spots.)

Someone at Google must have seen that commercial and also thought we deserved for it to be a reality. However, you don’t have to shell over millions of dollars to hear John Legend tell you what couscous it. You will just have to pay $99 for a Google Home.

The new voice assistant additions were just one of the announcements at the I/O conference. As Business Insider reports, Google is adding a whole bunch of features that make its voice assistant easier to use. (John Legend’s voice doesn’t make the voice assistant any more intuitive, per say. But it does make the experience more enjoyable. Truly a win for everyone.)

Google is also rolling out a feature called “Pretty Please,” aimed at teaching your kids better manners. Rather than passively-aggressively asking you to ask more politely (which would be up there with Alexa randomly laughing on the list of things I don’t want to hear from a robot), Google Assistant will provide positive reinforcement when it hears certain words. For instance, if your question includes “please,” it will respond with: “Thanks for asking so nicely.” Is it endearing? Is it creepy? Is it one step closer to AI taking over and raising our next generation and turning them into AI-Human hybrids? Probably but also AI voice features are so convenient!

In addition to speaking in different voices, you’ll be able to ask Google Home multiple questions at once without confusing the AI. You’ll also be able to ask follow-up questions without having to start your query with “Okay, Google.” However, as Business Insider points out, that does mean Google is listening longer.

Robots, man. They’re going to take over, and they will maybe sound like John Legend.