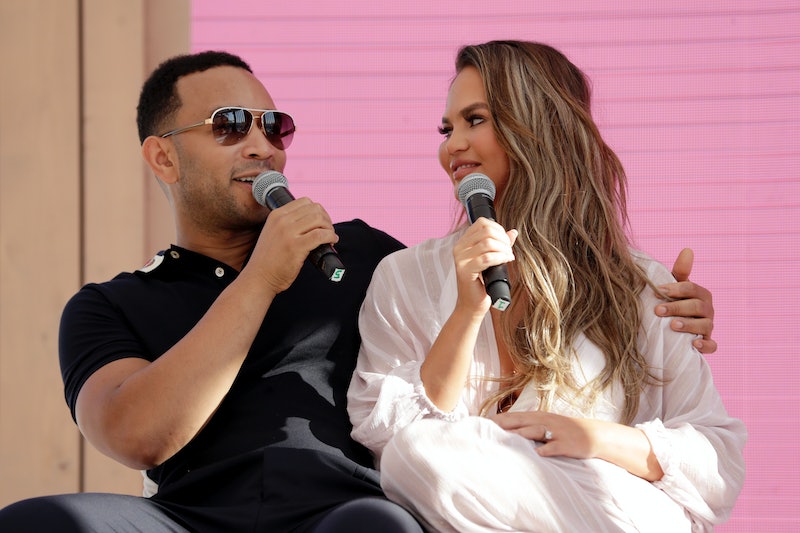 If you're not already following Chrissy Teigen on Twitter, you're seriously missing out. The model, cook, and author is hilarious online, and she tweets about everything from politics to what TV show she's watching. Another thing she tweets about often is her relationship with husband John Legend, which is seriously so sweet — just watch this video of Legend trying to finish Teigen's tweets, and you'll see.

The "All of Me" singer participated in this "Finish the Tweet" segment on Ellentube, the companion video channel for The Ellen Show, on Monday, July 8. The concept was simple: He just had to fill in the blanks of Teigen's tweets about him. "I'm testing how well I know my wife by correctly finishing her tweets," he declared. He was a little less confident toward the end, claiming, "I got, like, two out of 10 or something."

Legend should actually give himself more credit, though — out of seven tweets, he managed to get five right, or at least mostly right. He must pay really close attention to Teigen's social media presence. Maybe he has post notifications turned on for her?

Or, maybe, he just knows his wife that well. Legend and Teigen have been together since 2006 and married since 2013, after all. They probably know each other inside and out by this point, especially since neither of them seems shy about sharing their thoughts with one another.

In fact, Legend even reconfirmed the story Teigen revealed on Family Feud in June that he and Teigen slept together the night they met. He was easily able to fill in the blank of one of Teigen's tweets that said, "Every time someone asks john for a selfie and says 'I never do this' I think back to the night we ___ when I said it but not about selfies."

"First met or boned," Legend answered, with an impressively straight face. "We met and we boned that night."

He continued to joke, "Congratulations to us." And honestly? Congratulations to the rest of the world, too, because without that fateful meeting, there would be no funny Teigen tweets about Legend, and no adorable videos of their children, Luna and Miles.

Legend correctly finished tweets Teigen wrote about going through Legend's phone, Legend's Spanish skills, and how she was shocked Legend followed her on Twitter (though she admitted she was drunk for that last one). Some of these go as far back as 2013, so yeah, these two really are couple goals.

"I don't know," Legend said when he got stumped on one. "There's so many tweets." He's not wrong about that; Teigen's iconic tweets have spawned lists up to over 100 items long because they're so funny, so no one can fault him for missing one or two.

This video is the perfect follow-up to the couple's separate appearances on The Ellen Show in 2018, where Ellen asked them both personal and career questions about their spouse. Teigen hilariously couldn't answer most of the questions, but hey, she at least she was honest.

Legend fared much better in comparison, though. He even knew Teigen's favorite word, which was not exactly SFW.

Does this mean Teigen will soon be challenged to finish Legend's tweets? One can only hope.