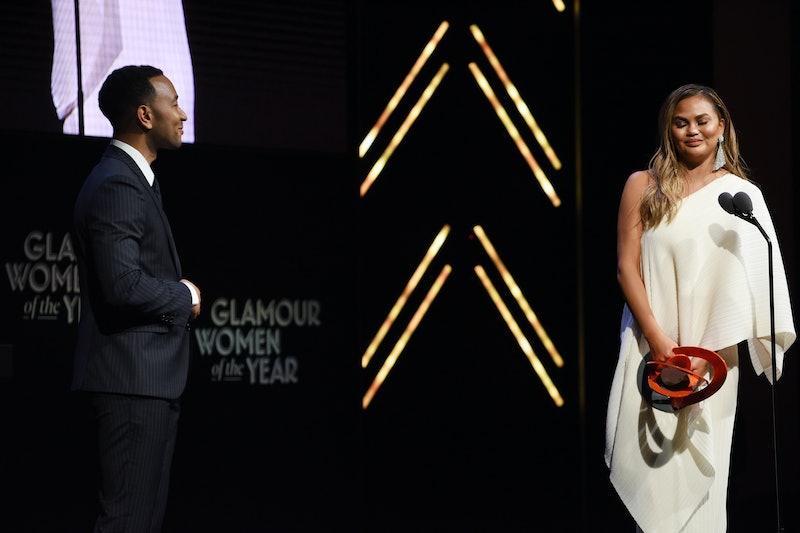 John Legend really lives up to his last name. Not only did he EGOT this year (and became the first black man in award show history to do so), but he’s also the best husband ever. On Friday, Legend wished his wife Chrissy Teigen a happy birthday on Instagram, and his simple message was more than enough.

Usually Legend is super extra when it comes to supporting and fawning over his wife Teigen, who just turned 33. So he didn't need too many words this time to make it special, posting a photo of her on Instagram with the caption, "It's Chrissy's birthday! I love you, my Queen!" The 1,900 comments and 215,000 likes (and counting) also love Queen Teigen.

There's no need for a long, heartfelt message of love and adoration from Legend to Teigen on her birthday, because he does that just about everyday. His most recent act of perfect partner-ing came in his speech at the Glamour Women of the Year Awards on Nov. 12, when he introduced his wife who was receiving the honor. And boy, did he tear up in the sweetest way. Afterwards, during her speech, Teigen cried too, and so did anyone watching, really.

Legend called himself Teigen's "trophy husband," and said of her:

"In her Glamour profile, she talked about a time when we were at this big event and she was crying in a dressing room because she felt so overwhelmed by the illustrious company she was in. We were celebrating the Time 100 and she felt like she didn’t belong. How could she be worthy of the likes of Oprah, Christine Lagarde, Michelle Obama?

Well, I’m here to say that you belong here. I think it has become very clear to Glamour magazine and to many millions of people around the world that you are more than worthy of this honor tonight. I am amazed by the woman that you’ve become. And I’m truly glad that the rest of the world has finally found out about it too."

He praised her influence on social media that has made her so lovable and relatable to her fans, and gave her props for being blocked by, who he called, "the sh*ttiest person on the internet." Really, is there any honor greater?

So no, Legend didn't need to post anything more than the sweet picture of Teigen on her birthday, because the couple celebrates each other basically every day. Even though Teigen rags on him and pokes fun at him constantly, everyone knows she's like, just as obsessed with him as he is with her.

In her acceptance speech, during which she was sobbing (who can blame her?), Teigen said about her husband:

She admitted that she hated how sappy she was getting, saying, "I'm sorry. I hate it. I didn't cry during our wedding. I hate you, John. I really do." But everyone knows when a girl says she hates you jokingly, it means she super loves you.

So happy birthday to Queen Teigen who is surely getting showered in love by her legendary husband. May they eat the world's most splendid chicken pot pie.