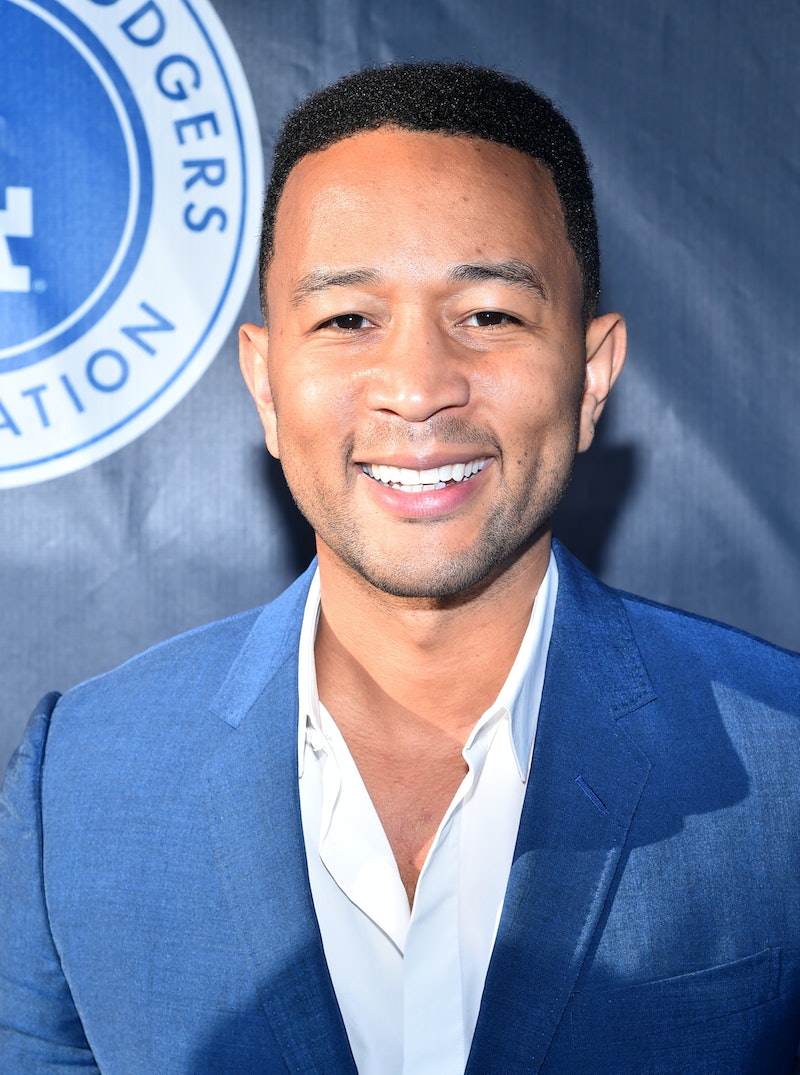 In the current climate, it's all too easy to feel helpless, but as the "Families Belong Together" marches taking place across the country on Saturday, June 30 prove, people still have a voice. That's a message that John Legend's "Families Belong Together" march song "Preach" drives home through its lyrics urging people not to stop fighting. Legend debuted the song at the Los Angeles rally in front of crowd of people who were gathered together in protest of the Trump administration's Family Separation policy.

Before Legend began to sing, he gave a speech about the need for action in order to reunite families separated due to the "zero tolerance" immigration policy. The singer said,

"If you're committed to this kind of love, it means you believe in justice, but it's not easy. It's not a passive activity, it requires you opening your eyes to injustice. To see the world through the eyes of another you've got to read; you've got to travel to other neighborhoods and other parts of the world. You may have to get your hands dirty. You can't just talk about it or tweet about it. You've got to do something."

Legend then launched into "Preach," a song that could be described as an anthem for people exhausted by the constant barrage of heartbreaking and infuriating stories on the news. The "All of Me" singer's latest song is one that highlights the feelings of helplessness, while also calling for people to actively work for the change that they want to see in the world.

Not only was Legend at the Los Angeles rally, so was his wife, author and Lip Sync Battle co-host Chrissy Teigen. According to a tweet shared by Teigen, she introduced her husband to the crowd. The couple made the event a family affair by bringing along their infant son, Miles, too. (It's unclear if their daughter, Luna, was there.)

Legend and Teigen have never shied away from being politically active, but the couple's dedication to keeping the families of immigrants and asylum seekers together has been fierce. Together they rallied their social media followers to give $1 million to the ACLU in just two days. Legend has also been vocal about speaking out against the Trump administration's immigration policies on Twitter. On Father's Day, he retweeted Paul Ryan, and wrote, "Seriously, f*ck you. Reunite the families at the border and we can talk about father's day."

For Legend and Teigen, "Preach" feels like a culmination of their drive to advocate for the children and parents who have been separated since the "zero tolerance" policy began.

Many celebrities across the country joined in the marches on Saturday, including America Ferrera, Lin-Manuel Miranda, Amy Schumer, and Alicia Keys. From Los Angeles to D.C., musicians, actors, activists, and concerned citizens have banded together to make it clear that they believe families belong together. From the powerful letter from a mother who was separated from her son to Legend's "Preach," the day was full of moving moments.

What Legend makes clear with "Preach" is why so many people showed up in the heat with their children, carrying signs, and fighting to make sure their voices are heard: Complacency isn't an option. The news cycle may be overwhelming, but when it comes to making sure children and parents are brought together again, people like Legend and Teigen are determined to make sure the government doesn't continue to fail them.

Even though "Preach" isn't officially available anywhere yet, it already feels like one of Legend's most important songs. He's singing to a base of people that may be tired, but who are refusing to stay quiet when so many children need them to speak up.