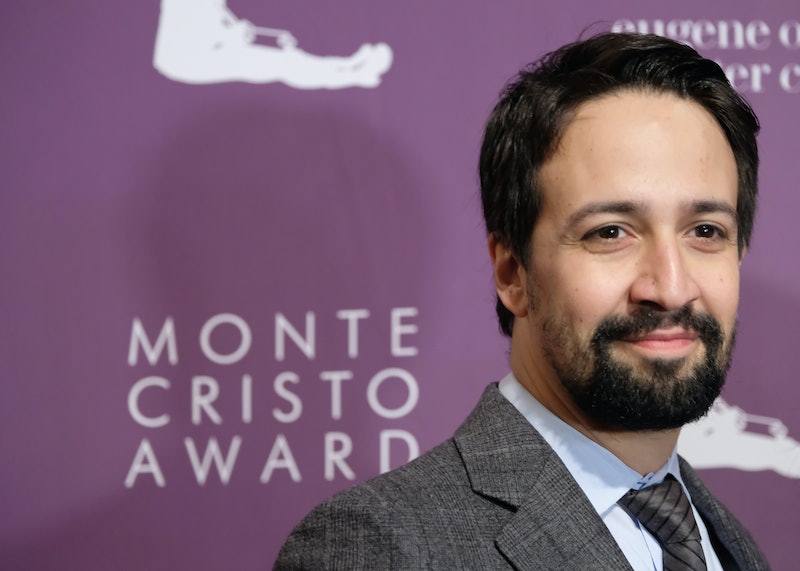 Thousands of people are marching in cities across the country on Saturday, June 30, to protest President Donald Trump's "zero tolerance" immigration policy. Hamilton creator Lin-Manuel Miranda joined the Families Belong Together March in Washington, D.C., and the acclaimed Broadway star sang a lullaby for children who have been separated from their families. Miranda's lullaby, "Dear Theodosia," comes straight from his hit musical, and it's a touching ode to Aaron Burr's daughter Theodosia, and Hamilton's son Philip.

As seen in CNN's video from the rally, before he launched into an a cappella version of his song, Miranda said to the crowd,

"Because there's parents right now who can't sing lullabies to their kids, I'm just going to sing a lullaby that I wrote, and this is for those parents, and we're not going to stop until they can sing them to their kids again."

In the full video shared by Now This, you can hear the audience join in with Miranda, and the singer appeared to be visibly moved. After his performance, he shared on Twitter, "The moment the audience came in with the countermelody will live in my heart forever. Thank you."

On Tuesday, a federal judge ordered the Trump administration to reunite all of the children and parents who have been separated due to the "zero tolerance" policy within 30 days, as reported by CNN. However, activists and protesters like Miranda want to ensure that the current administration follows through on the order, while also making their voices heard on the matter of family separation.

Miranda was one of a number of celebrities who showed up at marches on Saturday. Others who marched include Chrissy Teigen, Alicia Keys, Kerry Washington, and Amy Schumer. Keys read a letter at the rally in D.C. written by a mother who has been separated from her son. Keys' own son, Egypt, 7, was with her at the march, and before she read the letter, she explained why family reunification means so much to her.

Keys, Egypt, and Miranda joined with Superstore star America Ferrera for a photo at the rally. All of them are wearing white, the color people are wearing to show their support for reuniting children who have been separated from their parents under the zero tolerance policy. Miranda captioned the photo with a simple message, "#FamiiesBelongTogether#DC America & Alicia & Egypt."

While many issues divide people down party lines, a recent CNN poll found that 67 percent of Americans are against children being taken from their parents. As Miranda's heartbreaking rendition of "Dear Theodosia" illustrates, there are far too many children facing days of not having their parents tuck them in at night ahead of them as they wait for the American government to reunite them with their parents.

The "Families Belong Together" marches brought out celebrities, as well as thousands of concerned citizens who want to see the damage done by this policy repaired — at least to the extent that it can be. Having the support of people like Miranda can only help the cause, and amplify the voices who are speaking out against this administration's immigration policies. While only time will tell how long it will take to bring these families back together, knowing that Miranda and so many others are letting these children know that they have advocates fighting on their behalf is beautiful.