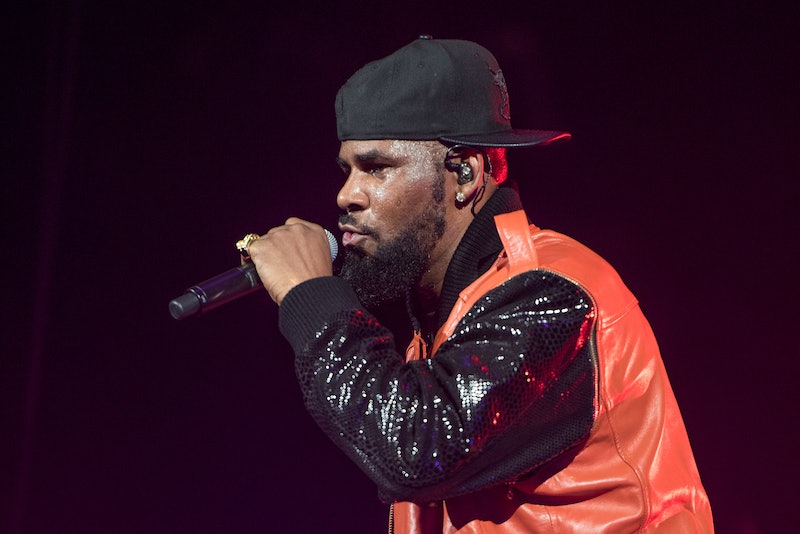 On Thursday Jan. 3, Lifetime aired the first portion of its harrowing docuseries, Surviving R. Kelly and it quickly triggered a shockwave of emotions on social media that were hard to ignore. The film series, centers around singer R. Kelly and his alleged sexual abuse of women and minors, which Kelly has repeatedly denied over the years. While there were many who chimed in to share their disdain for the singer's purported transgressions, it was John Legend's Surviving R. Kelly tweet that really helped to place focus where it belongs — on the survivors of Kelly's alleged sexual misconduct. (Bustle did not hear back from representation for R. Kelly, whose real name is Robert Kelly, at the time of publication.)

Legend, one of the more popular faces to appear in the six-part, three-night documentary, took to Twitter to offer his gratitude to the show's creator and executive producer dream hampton (stylized with lowercase letters ). In his tweet, Legend made it clear that he stands by the survivors, sharing that they "deserved to be lifted up and heard." He continued reinforcing his support, saying, "I hope it gets them closer to some kind of justice."

After receiving a lot of praise for being one of the few famous faces willing to appear in Surviving R. Kelly, the "Glory" singer reminded people of the importance behind the docuseries, asking viewers to not focus on him being "courageous" for speaking out. He instead emphasized the importance of the women and their stories being heard and said it was an "easy decision" for him to voice his opinion on Kelly, who he referred to as a "serial child rapist."

Legend's participation in the film was significant, as it helped to draw attention to the serious nature of the accusation being brought against Kelly. But, aligned to Legend's message, while he might deserve some recognition for stepping up and lending his voice to the film, it's the voices of Kelly's alleged survivors, who have been silenced for far too long, that need to be the focus of viewers' attention. And the fact that Legend made sure to begin his series of tweets on the subject with a shoutout to hampton makes it clear that the singer knows where the real credit is due: and that's with the women who made Surviving R. Kelly possible.

For hampton, raising the voices of those who have accused Kelly of abuse was the main goal in creating the docuseries, which was built on dozens of interviews, including some with people who claim to have been abused by him. In an interview with Entertainment Weekly, hampton shared just how distressing the findings actually were and pointed out daunting similarities in the women's alleged encounters with Kelly. Telling EW, "We wanted irrefutable evidence." hampton went on to explain:

"Without leading any of these women, they all had the exact same stories, even if their interactions with R. Kelly were 15 years apart. All of them have stories about being physically abused, being videotaped without consent, being denied food or bathroom privileges as a punishment. All of them have stories about rules that were established early on.”

hampton, a filmmaker and writer who spent the early years of her career as a hip-hop journalist for The Source and Vibe, took to Twitter to personally thank the women who shared their stories during the Surviving R. Kelly premiere. The filmmaker, who USA Today reveals interviewed a total of 50 subjects for the series, wrote, "From the bottom of my heart, thank you Jerhonda, Jovante, Andrea, Lizette, Lisa and Sparkle."

R. Kelly has been accused of sexual coercion, abuse, and exploitation multiple times, starting in 1994, when it was reported that he, then 27, married 15-year-old Aaliyah. In 2008, Kelly was acquitted of child pornography charges, according to Billboard. During the trial, prosecutors presented a videotape which they claim showed Kelly engaging in a sexual act with a girl estimated to be approximately 13 years old. Kelly plead not guilty to the charges and the alleged victim declined to testify in the case, according to theChicago Tribune. More recently, BuzzFeed published a report in 2017 about Kelly allegedly operating a "sex cult," which Kelly claimed was an "attempt to distort my character and to destroy my legacy," according to a statement provided to The New York Times.

As Surviving R. Kelly continues to gain viewers, regardless of whether Kelly files a lawsuit against Lifetime, like his lawyer claimed would happen if the docuseries airs, or whether celebrities like Legend speak out in support of the documentary, what's important is that women and their allegations against Kelly continue to be heard.