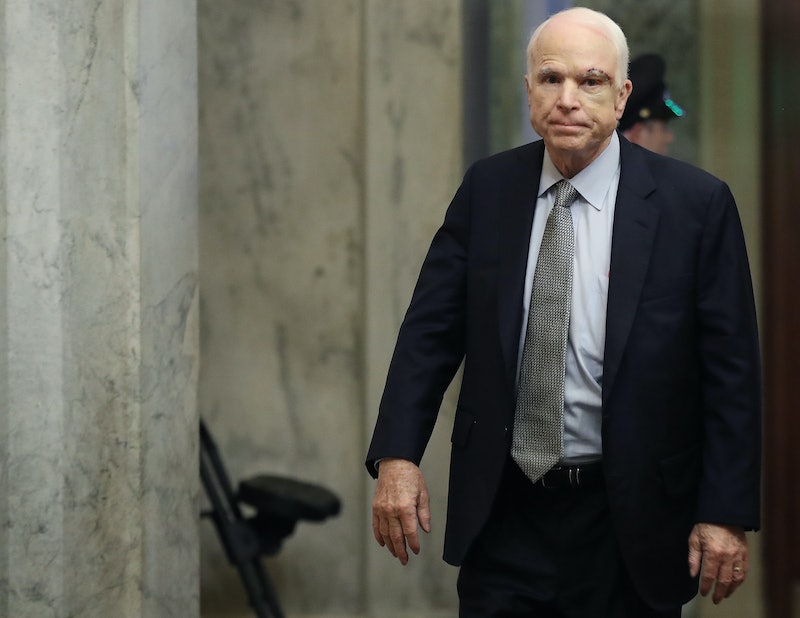 During his triumphant, and much-applauded, return to the Senate floor on Tuesday after being diagnosed with brain cancer, Senator John McCain announced that he would vote to begin procedural debate on the new GOP health care plan, but that he would not vote for the "shell of a bill" that Republicans proposed. Six hours later, he went back on his word. McCain defended his health care vote on Tuesday night, but his argument doesn't exactly hold up given how much he's spoken out against the bill in the past.

To be clear, McCain didn't vote to pass the Republican health care plan, known as the Better Care Reconciliation Act, on Tuesday; rather, he voted to advance the bill forward so that it could be put up for a vote in the near future. Ultimately, the repeal and replace measure failed in a 57-43 vote, but not before McCain cast a confounding vote in favor of it.

When asked about his decision by a Buzzfeed News repoter, McCain reportedly responded, "I just thought it would be good to move the process forward, and then we'll see what happens later on."

This statement is pretty perplexing for a variety of reasons. For starters, Senate debate over how exactly to repeal and replace Obamacare will continue for the next few days. McCain certainly could have offered other alternatives and ideas to "move the process" of health care legislation forward, even if he had voted against the bill he has decried.

Secondly, it's not entirely clear what McCain intended to do if the bill did, in fact, manage to move forward. It's pretty unlikely to assume that McCain would rush to the Senate to begin debate on health care, vote in favor of moving the BCRA forward, and then, when the bill reached the final stage of debate, vote against it.

And of course, "we'll see what happens later on" is not entirely reassuring rhetoric to hear from a politician who is tasked with defending a bill that could cause over 20 million Americans to lose their health insurance coverage. His statement doesn't seem to comprehend the gravity of the situation, or the reality that the bill he voted to advance could leave so many people around the country unable to afford medical care.

Ultimately, the real tragedy of McCain's health care vote is not necessarily his complete about-face that occurred in a matter of mere hours, but the blasé attitude that his response seems to send to the Americans who could stand to lose insurance coverage as a result of his vote.