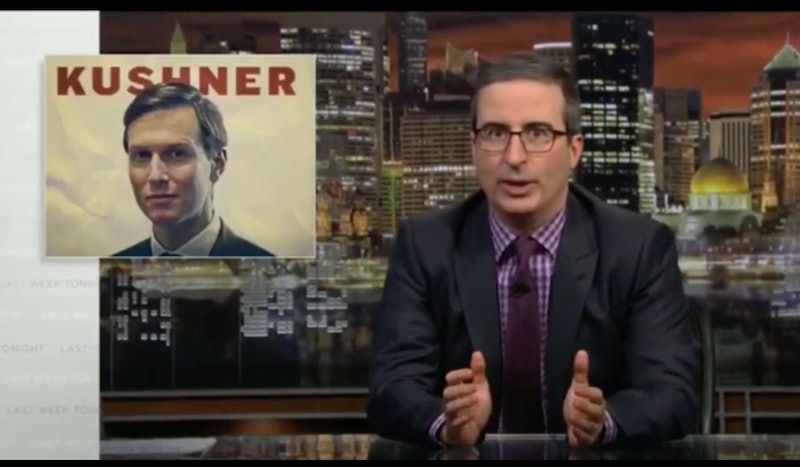 On Sunday's episode of Last Week Tonight, the show's host didn't hold back when it came to taking the president's son-in-law and senior advisor to task for his job performance. On the show's most recent episode, John Oliver mocked Jared Kushner, saying, among other criticisms, that Kushner looks too well-rested for someone with such a big to-do list. Notably, Kushner is in charge of brokering an Israeli-Palestinian peace deal and implementing nationwide prison reforms, among other things.

Oliver opened his segment on the president's son-in-law by noting that Kushner has recently been in the news because of a report regarding his security clearance process. Namely, the New York Times reported on Feb. 28 that Trump reportedly pushed for Kushner to receive a top-secret clearance, despite concerns from intelligence community officials. White House Press Secretary Sarah Huckabee Sanders didn't comment on these claims, saying to the paper, "We don’t comment on security clearances." Moreover, Peter Mirijanian, a spokesperson for Kushner's lawyer, told the outlet that Kushner didn't receive special treatment. "In 2018, White House and security clearance officials affirmed that Mr. Kushner's security clearance was handled in the regular process with no pressure from anyone," Mirijanian said.

The late night host noted that, while he finds recent reports about Kushner's security clearance process disconcerting, he's most perturbed by something perhaps a bit more surprising — Kushner's complexion.

How the f*ck does he [Kushner] look so well-rested!? This is a guy who's not just brokering peace in the Middle East, he's tackling the opioid crisis and national infrastructure as head of the Office of American Innovation while constantly traveling halfway around the world — and doing it all while navigating the psychosexual Stalingrad that is marriage to Donald Trump's daughter.

The comedian then continued by proposing that Kushner's relaxed facial expression seems to imply that he doesn't fully grasp the weight of the tasks that the president has assigned him. "Where are the bags under his eyes? How is his skin so smooth?" Oliver questioned. "It is deeply worrisome how unworried he looks. The only way you maintain that glow with that to-do list is by not really understanding anything on it."

Oliver then suggested that Kushner is aging well compared to other officials charged with establishing international peace accords, much to the comedian's dismay. "Do you want to know what the guy who helped broker the 1993 Oslo Peace Accords looked like?" he asked. "That's a rhetorical questions because you absolutely don't."

Oliver then shared a photograph of the former secretary of state responsible for negotiating this agreement. "This is former Secretary of State Warren Christopher. Those are the jowls of a deeply stressed out individual. Stress that's completely appropriate given the gravity and complexity of his workload," Oliver asserted. Then, Oliver noted that, by comparison, "Jared ... looks like a 17th century portrait of a Dutch teenager." The comedian further pointed out that he also thinks that former Secretary of State Henry Kissinger looks "reassuringly terrible" compared to Kushner.

Overall, Oliver certainly used a surprising metric as a means of evaluating Kushner's job performance thus far. Time will tell if the late night host will continue to rely on Kushner's complexion to assess how the president's son-in-law approaches his role of senior advisor in the future.