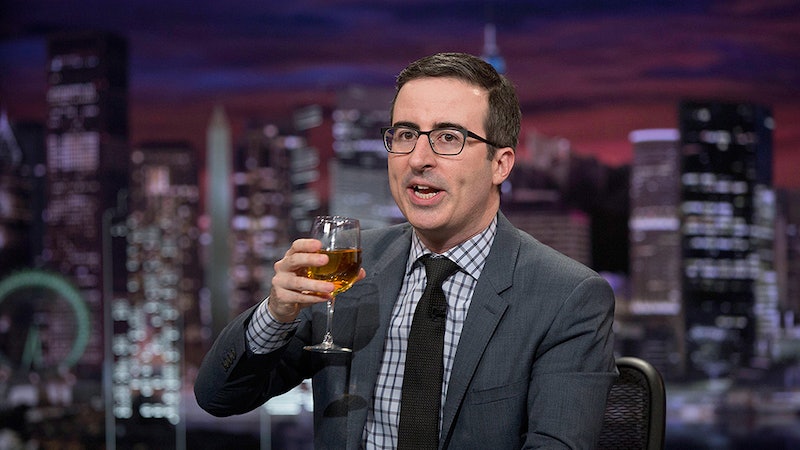 Throughout the first fraught month of the Trump administration, contrary to what you may have heard, not all Democrats or progressives have been in the dumps. In fact, there's at least one major figure on the political left who's seemingly been having an absolute ball of a time, and John Oliver seems to be over it. Namely, as the HBO host explained in an interview with Seth Meyers this week, Oliver's has enough of post-presidency vacation Obama, and isn't sure a photo of the 44th commander-in-chief gleefully windsurfing with billionaire Richard Branson will resonate well with the American public right now.

Obviously, Oliver didn't voice any general objection to Obama taking some time off after a profoundly busy eight year presidency ― to the contrary, he said he's "glad that he's having a nice time." However, the photos of him reveling in his vacation time, all while "America is on fire," seem to have left Oliver with a case of sour grapes.

"I know that people accused him of being out of touch with the American people during his presidency," Oliver joked. "I'm not sure he's ever been more out of touch than he is right now."

Whee! Wheeeeeee! Isn't this fun? We're losing public schools. Whee! You're fiddling while Rome burns! Whee! Billionaires are fun people to be around.

Even if you're a fan of Obama's, and have a fair measure of respect for how tiring a job the presidency is and how he's decided to unwind, you can probably sympathize with Oliver's thinking on this.

While there's nothing wrong with delightedly partaking in all the fun afforded by visiting a world renowned billionaire's private island, it's not exactly the image you would've assumed Obama would want out there at this moment in America's political history. As Meyers added: "I don't mind that he's doing it, I just can't believe that he didn't say 'hey, don't take pictures.'"

For what it's worth, Obama hasn't remained strictly out of the political loop since leaving office ― his spokesperson released an official statement weeks into his vacation voicing support for the mass protests against President Trump's executive order barring immigrants and refugees from seven Muslim majority countries.

There's no official schedule revealing just how long Obama will be hanging out at Necker Island, Branson's private Caribbean getaway, but he seems to be enjoying it to the fullest while he can.

As for Oliver, the third season of his hit HBO show aired its first episode last week, and surprise surprise, it had a lot to do with the Trump administration ― the people who're busily setting America on fire, in Oliver's view. For his first splashy joke of the season, he says he's purchased ad time in Washington, D.C. to air during some of the cable news shows Trump is widely known to watch, in an attempt to send him some pointed (and often quite rudimentary) tips about world politics and governance.