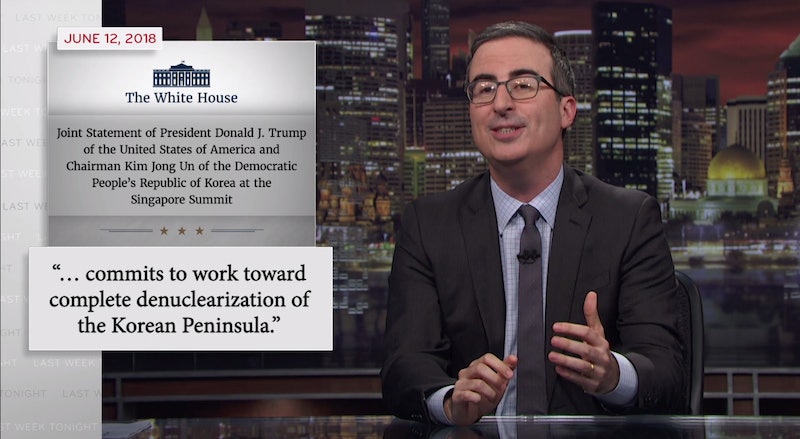 The most recent episode of Last Week Tonight kicked off with a brief analysis of President Trump's historic — and controversial — North Korea summit that took place on June 12. In fact, in analyzing the summit, host John Oliver mostly let Trump's Kim Jong Un comments speak for themselves — and they were very telling.

Oliver opened his segment by noting that Trump had characterized the summit as a success, despite members of the public having mixed feelings about both the nature and outcomes of the summit. Indeed, as Oliver noted, following the historic meeting, Trump tweeted,

Everybody can now feel much safer than the day I took office. There is no longer a Nuclear Threat [sic] from North Korea. ... Before taking office, people were assuming that we were going to War [sic] with North Korea. President Obama said North Korea was our biggest and most dangerous problem. No longer — sleep well tonight!

In response, Oliver indicated that he was not at all put at ease by Trump's tweets. “Donald Trump telling me I can sleep well tonight is like the Grim Reaper telling me to have a happy birthday,” the late night host asserted. “His presence is the reason I will not."

Oliver then further took Trump to task for the president's comments regarding authoritarian leader Kim. Oliver characterized the U.S. president's apparent adulation for the North Korean leader as disconcerting. As Oliver put it, "While diplomacy always involves some amount of sucking up to horrible people, Trump went above and beyond."

The host then played a clip of Trump offering heavy praise for the North Korean leader. In the clip, the American president asserted,

Really, he's got a great personality. He's ... a funny guy. He's a very smart guy. He's a great negotiator. I think he liked me and I like him. He's smart. Loves his people. He loves his country. He wants a lot of good things and that's why he's doing this.

Oliver then adamantly noted that he disagreed with all of Trump's claims about Kim's personality and intentions. The host then further joked, "Look, I'm not going to say that part of Trump's admiration for Kim is that he wishes he could be a dictator as well. I'm going to let him say that." Oliver then showed a clip in which Trump indicated that he wants people to respond to him the same way that they do to Kim. As Trump put it:

He's the head of a country. And, I mean, he's the strong head, don't let anyone think anything different. He speaks and his people sit up at attention. I want my people to do the same.

Oliver asserted that he believes Trump is essentially saying that he wishes he was an authoritarian leader, not a democratically elected president. As the late night host commented:

That's right. That is the president of the United States expressing a wish that people would model themselves after the malnourished population of North Korea. Now maybe he just meant that White House staff should sit up. Maybe he meant everyone should. But either way, it's clear that the president wishes he was a dictator, which is a dire realization right up there with "the robots have become sentient" or "the cat has power of attorney." Wow, how the f*ck did we get here?

Overall, it is clear that Oliver believes that Trump's comments about his meeting with Kim are quite telling — and that he thinks they reveal a disconcerting level of admiration for the authoritarian North Korean leader. Time will tell whether Trump continues to offer praise for Kim and whether the summit has any long-term impact on North Korea's actions and/or on the U.S.-North Korea relationship.