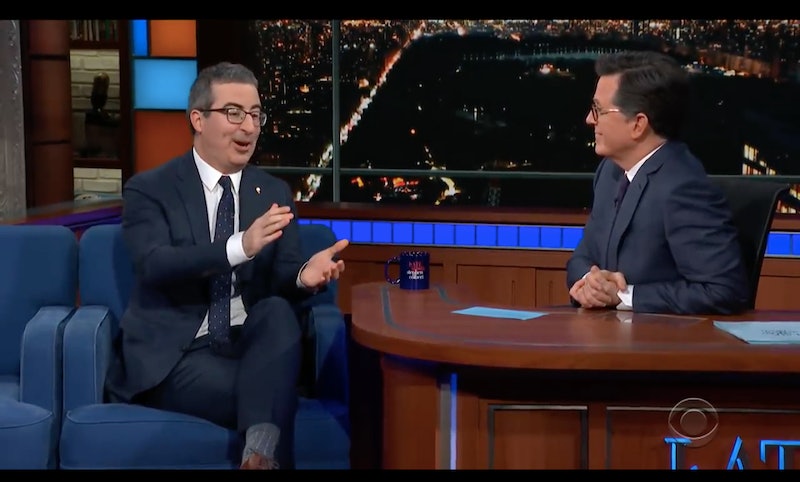 The Late Show With Stephen Colbert/CBS
By Sarah Friedmann
Feb. 13, 2019

On Monday evening, Stephen Colbert interviewed one of his fellow late night colleagues — and the Last Week Tonight host made a suggestion about the 2020 presidential election that didn't sit well with the crowd. Notably, John Oliver said that Trump's 2020 campaign could be successful. In response to his remarks, the audience at The Late Show collectively booed.

Oliver's comments came as Colbert asked him if his confidence was high and he was "feeling good" about the upcoming new season of Last Week Tonight, which is set to debut on Feb. 17. In response, Oliver suggested he is rarely confident, saying, "Confidence high? No. My confidence is never high. Self-loathing high, concern astronomic."

Colbert then noted later on in the interview that Season 6 of Oliver's show will premiere right around the mid-point of Trump's presidency. The Late Show host commented that "some people are saying, 'the end is in sight.'" Colbert also added, "I don't say that, but some people [do]." In return, Oliver suggested that he doesn't agree with these assessments. As the Last Week Tonight host put it:

I definitely don’t have that kind of optimism. To say we’re halfway through his [Trump's] presidency, I think, is to ignore the concept of a second term possibility. We are two to six years away from the end of his presidency.

After Oliver made these remarks, some in the crowd started booing, which the Last Week Tonight host appeared to interpret as them wanting Trump to remain in office for more than two terms. "Is there some big Trump 2024 fans in here?" he asked Colbert. "You’re pulling a different crowd."

Colbert and Oliver then continued to discuss Trump's tenure in office, reflecting on the notion that the Constitution limits Trump to serving a maximum of two terms as president. "[With] the Constitution, he has to go at some point," Colbert said to Oliver. In response, Oliver noted:

Yes. We all have something to aim at. We all have a finish line, like in a marathon, that we can try and stumble over. Be covered in a silver cape and have someone say, 'You really shouldn't have done that.'

In commenting on this metaphor, Colbert questioned if Oliver was suggesting that one of Americans' goals should simply be to "stay alive until January 21, 2025." Oliver laughed and replied, "Yes. I think that's what we all have to do. All of us. Especially [Supreme Court Justice] Ruth Bader Ginsberg."

Oliver certainly isn't the only one who thinks that Trump could possibly win the presidency again in 2020. Indeed, a CNN poll from October 2018 found that 46 percent of Americans surveyed said they think that Trump will win the 2020 election, while 47 percent said that they don't think he will win. Notably, another poll from Monmouth University conducted in November 2018 found that 59 percent of Americans surveyed do not want Trump to win a second term in office, The Independent reported.

Overall, it's apparent that Oliver's remarks about Trump's political future didn't go over well with some members of Colbert's audience. Notably, while Oliver didn't shy away from the topic on Colbert's show, it seems like he'll be less likely to discuss it on his own show. Indeed, the late night host told IndieWire on Feb. 4 that he doesn't really plan to cover the 2020 race on Last Week Tonight unless there's something "substantial" for him to discuss.