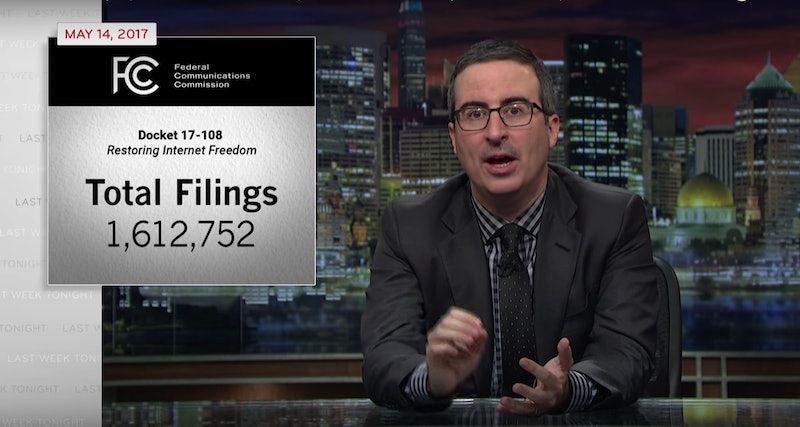 Luckily for his fans, this Sunday night brought not just one John Oliver segment, but two. In addition to his usual episode of Last Week Tonight, Oliver released a "Go FCC Yourself" web exclusive, keeping viewers in the loop as the crucial FCC vote on net neutrality approaches on May 18. Oliver said that instead of redirecting you to the FCC's net neutrality comments section, you'll be led to a holding page — at least for now.

Net neutrality refers to the way in which internet providers must treat all web data equally. In other words, it mandates that the internet is treated more like a utility that allows users to access any website they want — and at the same speeds. If you care about upholding the values of net neutrality, you'll be distressed to know that the FCC will not be taking comments in the week leading up to the net neutrality vote. That's why Oliver is redirecting your comments for the time being. However, when the vote is over, he encourages you to once again inundate the FCC's website with comments, especially if the FCC votes against protecting net neutrality.

Thus far, GoFCCYourself.com has been incredibly successful. It was so successful, in fact, that it crashed the agency's official website, causing quite the uproar. According to Oliver, the site attracted over 1.6 million comments on net neutrality, though not all of them were in favor of protecting it. As the host noted, remarks came from all ends of the political spectrum. But it was the comments from bots that were especially peculiar, if not concerning.

In the same breath, Oliver also decried the inappropriate comments posted on the site, some of which were reportedly racist. "Please comment in a civil, clear fashion," the host urged his viewers. In addition to uncalled-for comments, remarks posted by bots also seemed to be a problem. But it's worth noting, Oliver explained, that many of these bot comments didn't support net neutrality. Instead, they advocated for dismantling it. In fact, the FCC counted 128,000 anti-net neutrality remarks likely posted by spam bots.

Regardless of whether the FCC begins dismantling net neutrality protections on May 18 or not, you shouldn't hesitate to continue posting your comments to the FCC after that point — that is, assuming you're not a bot. If you don't want to see net neutrality disintegrate, tell FCC Chairman Ajit Pai that you want to continue to protect it.