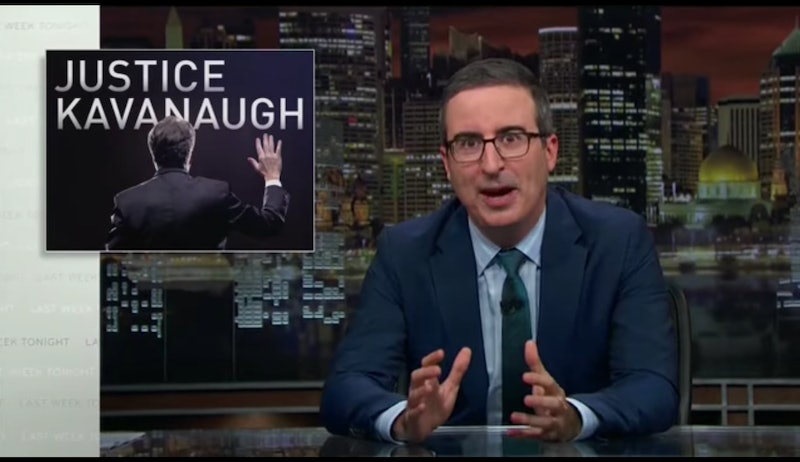 On Sunday's episode of Last Week Tonight, host John Oliver suggested that Kavanaugh's confirmation process has likely eroded some of Americans' trust in the Supreme Court. The late night host faulted Senate Republicans for this outcome, condemning their rhetoric and actions during Kavanaugh's hearings.

The comedian opened his segment on Kavanaugh by asserting that he believes that, no matter what was unveiled during the now-justice's confirmation hearings, Senate Republicans were fundamentally determined to confirm Kavanaugh. As the late-night host described:

Look, what became painfully clear this week was that no step in this process had a chance of altering Republicans' course. Not Blasey Ford's testimony, not the wildly inadequate FBI investigation, not a letter signed by 2,400 law professors saying they opposed his appointment. Not even retired Justice Stevens arguing that, after watching Kavanaugh's testimony, he no longer felt that he was fit to serve on the court.

Oliver then took specific Republican legislators to task for the way they acted during Kavanaugh's confirmation hearings. First, Oliver critiqued Senator Orrin Hatch of Utah, who was recently seen in a video dismissively waving away a small group of female protesters who wanted to have a discussion with him about Kavanaugh. The Senator also told the women that he would only speak with them once they "grow up." Oliver appeared appalled by Hatch's behavior, saying, "Wow. Even setting aside the spectacular conversation of telling adult women to 'grow up,' that wave is a pretty clear f*ck you."

A bit later in the segment, Oliver played a clip of Senator Susan Collins of Maine defending her decision to confirm Kavanaugh — and characterized her remarks as "spectacular bad faith bullsh*t." In her speech, Collins condemned the "dark money" she believed was being spent to oppose Kavanaugh's confirmation. For his part, Oliver pointed out that Collins' criticism of this "dark" television ad money was quite ironic, considering that the vast majority of it (around $7 million of $9 million total) was spent to promote Kavanaugh's confirmation.

Oliver summed up his frustration with the recent SCOTUS confirmation process — and the Republican legislators involved in it — by asserting that it lacked principle, and could also have dangerous consequences. "This entire process wasn’t about principle," Oliver said. "It was just about getting what you want, no matter how you have to do it, or what damage it does to Dr. Ford, to other survivors, or to fundamental trust in the Supreme Court."

The comedian concluded his Kavanaugh segment by saying that, despite what he believes are their questionable tactics, "the Republicans won this week in a big way and it could take decades to undo their damage." However, the host indicated that, for those who are feeling frustrated by Republicans' actions around Kavanaugh's nomination, they can take action via the ballot box. As Oliver put it:

If you are looking for where to start, Nov. 6 is just one month away. And you have a chance to deliver the only form of accountability that actually matters to Trump and his party. And while it is by no means a foregone conclusion, it is the only chance we have to look at some of these people straight in the eye and say goodbye.

Thus, if you, like Oliver, found Kavanaugh's confirmation process problematic, you can certainly make your voice heard in the rapidly-approaching midterm elections.