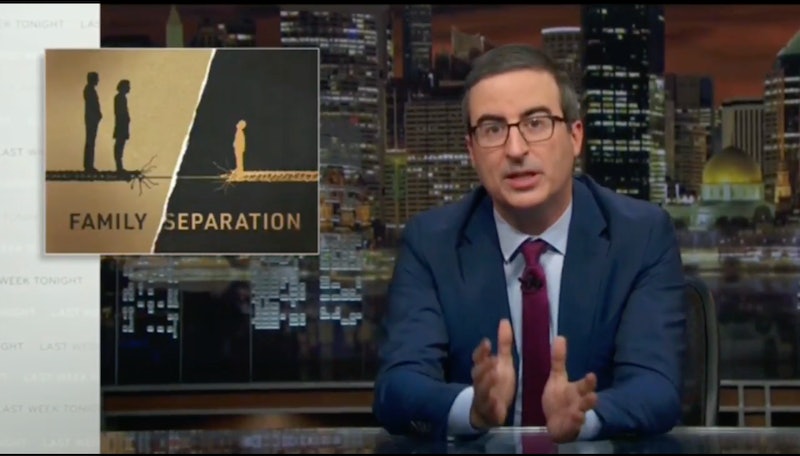 In the days leading up to the midterms, Donald Trump has repeatedly condemned the caravan of migrants currently making its way to the United States' southern border, where many plan to claim asylum. On his show on Sunday, John Oliver used Trump's family separation policy to illustrate the way in which migrants may be treated at the border when they arrive, potentially in several weeks' time.

To open his main segment, Oliver played a clip of Trump giving a speech. In the clip, the president asserted:

The late night host noted that, recently, Trump has suggested taking various hardline stances on immigration, including potentially eliminating birthright citizenship and sending active duty military troops to the southern border. However, Oliver also said that, despite his rhetoric, "It's hard to know what the president will or even can do [about immigration] going forward."

Therefore, the host asserted that it was important to take a look back at Trump's immigrant family separation policy. Oliver suggested that the policy epitomizes what he believes is the Trump administration's anti-immigration stance — and could offer a glimpse into how it may approach the migrant caravan when it arrives.

Oliver's family separation segment centered on two questions: how the policy was implemented and why. In regards to the "how" question, the late night host asserted that the policy was implemented "incompetently and cruelly." To illustrate his point, Oliver said the government indicated that, overall, it separated around 2,600 children from their parents and noted that around 220 are still being held in custody. However, as Oliver put it, "we actually can't say for sure whether either of these numbers are accurate" because of the government's questionable record-keeping.

For example, as the comedian noted, recently the U.S. government reportedly found 14 more separated children and added these children to its records. Oliver was aghast at this news, saying, "Just think about that! 14 children were missing and we didn't even know it! How is that not a bigger story?"

Oliver then moved on to the "why" component of his family separation segment, noting that he believes the Trump administration separated families because it wanted to take a politically-motivated anti-immigrant stance. The Trump administration has argued that family separation simply reflects immigration officials carrying out law enforcement duties. However, Oliver pushed back, saying:

I would argue that this [family separation] is the logical result of a general hard right turn toward demonizing immigrants for political advantage, in a move that some might call racist and others would be wrong about.

Thus, the late night host thinks that the Trump administration's hardline anti-immigration policies, along with its rhetoric that inappropriately criminalizes immigrants' actions, is designed to engender support for the right — and to deter immigration overall. Oliver implied that Trump's language about the migrant caravan reflects these intentions, and also means that those in the caravan could be subject to similar policies, including a new family separation proposal. The comedian wrapped up his piece by implying that voters should use Nov. 6 as a referendum on Trump's immigration policies, which he believes threaten the future of the United States.