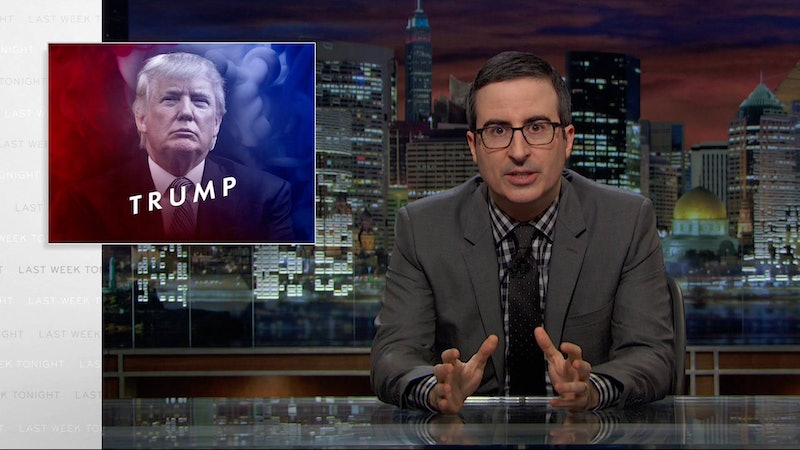 Adjusting to this whole new "Donald Trump is the president" thing hasn't been easy — especially with John Oliver's Last Week Tonight on hiatus for the past couple of months. I feel like the world is slightly back in order now that it's back, but watching Oliver's Trump episode actually just made me extremely sad. I know exactly why — and yet it's still hard to put a finger on it, because there are so many reasons to choose from, and Oliver basically touched on all of them.

There's the team of people Trump has put together to govern, which Oliver reckons he assembled "sarcastically". There's Trump's habit of lying, which nothing seems to be able to stop. There's his reliance on Breitbart, both at press conferences and for the version of the world that he believes. Oliver even put the pieces together to point out exactly where Trump gets his reality from, whether you're talking about voter fraud or Muslims supposedly celebrating in the streets after the September 11 attacks (neither, of course, are real).

"Facts" like these come from Twitter unsubstantiated, get picked up by right wing news outlets, and then the president reads them and passes them on because they back up his worldview where he is the best and any poll saying otherwise is "fake news".

Oliver's comedy is spot-on and his observations are astute, but the fact that he has to make them just underscores the fact that this is the world that we're living in.

"Any negative polls are fake news" is the sort of thing that you'd expect in, like, Turkmenistan, where the current president won 97 percent of the vote in 2012 and isn't expected to face much of a challenge from the eight people running for the position against him last year. The same man also made a literal giant golden statue of himself on a horse, and his predecessor, a similar figure, changed the names of the months and days of the week so that they were named after himself and members of his family. Let's be clear — Trump has not done anything like that. But at this point, would you really be so surprised if he tried to?

As Oliver so rightly states, "real people get hurt when you make policy based on false information." Trump is actually going to be governing based on what he believes — so money will be spent on a wall to solve Trump's made-up crime wave, and refugees will be forced to remain in unsafe situations because he believes, based on no verifiable information, that refugees come into the country and commit terrorist attacks. And those are just the two examples that Oliver gives — there are plenty more where that came from.

I am thankful to have John Oliver to observe the inner workings of the U.S., and then talk to me about them in monologues laced with jokes and funny pictures. But the actual content? Terrifying. Upsetting. Above all, sad. At least Oliver also offers hope, in the form of the commercials he's running for Trump's benefit. I only wish that this was a country where the president didn't need to learn his basic facts from the host of a comedy show.