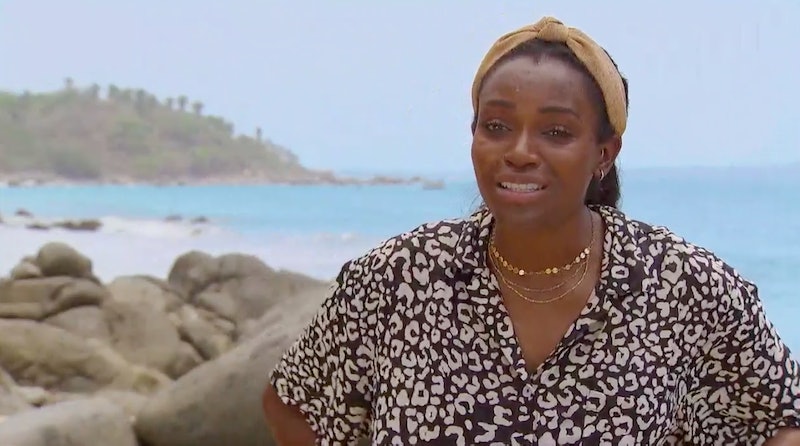 To continue his pattern of strange and awkward interactions in Paradise, John Paul Jones ate the date food on his one-on-one with Tahzjaun. And, just like with his Shakespearean sonnet and taco hurl, Bachelor Nation, nor Taj knew how to react. Everyone knows you're not supposed to eat the date food — except for JPJ, apparently.

The date was destined for cringe-worthy conversation when — well, when Tahzjaun asked JPJ to go. But really, he started off the date with an interesting question that Tahzjaun seemed either annoyed or confused by, and it rapidly spiraled from there. He asked her what the "etymology" of her name is, followed that up by asking if there's a "specific country" it comes from. She seemed unamused.

“Typically Mexico, you know, like Juan?” she said. He mumbled and nodded his head before quickly changing the subject and suggesting they dig into the food in front of them. A look of sheer panic quickly settled over Tahzjaun. “You’re not supposed to eat the food," she said. And JPJ just didn't understand. He was almost offended by the fact that food was placed before him that he wasn't allowed to eat. That whole concept made him want to eat it even more.

“Do you even know what that is?” she said as he stabbed a knife through what was supposed to be some type of chicken, possibly. She went on to say that if they were to go back to the beach and tell everyone he ate the date food, that they would never let him live it down. Still, he took a bite of the unknown substance. Afraid of contracting salmonella, Tahzjaun refused to join, but happily and confusedly watched JPJ indulge. And as soon as he did, it was like Jane gave him spicy tacos all over again. His familiar gagging noises ensued, but thankfully, he was able to hold his food (or food-like substance) down this time around.

While all of this was going down, Tahzjaun just watched in half horror, half adoration and complained of being hot. “We’re taking a shower together," she told him. They didn't actually make it to the shower, but they did take a dip in the water. And somehow, after the date food eating chaos, they still ended up making out by its end.

Tahzjaun called JPJ strange. "But I love strange," she said. “There’s this mystery about JPJ." She added, “He’s so him.” Despite the weird turn their date took, Taj still left the night smitten. And JPJ liked her, too. But when Hayley stormed the beach the next day and asked him on a date, everything changed. He said yes, and Tahzjaun was heated. So heated that she became faint and had to be escorted to a seat by producers. "I don’t even know how to brush my hair anymore," she said. Coming in late, she struggled to see all of the pairs cuddled up to each other on the beach. "It's only a matter of time before the train's gonna derail," Caitlin said. Hopefully it at least reaches the next table of date food.