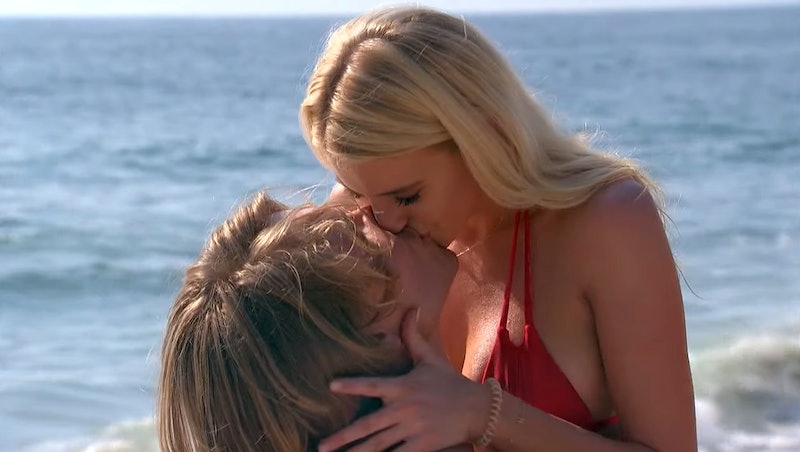 John Paul Jones may have wooed Tayshia with Shakespeare, but she's not the only woman interested in him on Bachelor in Paradise. John Paul Jones and Haley may be dating after Paradise since previews show they will share some romantic time on the beach. Even though JPJ is very happy with Tayshia, he catches the attention of both Haley and Tahzjuan when they arrive in Paradise during the Aug. 26 episode. Tahzjuan is shown becoming jealous of Haley in promos, so it seems JPJ may have a stronger connection to Haley than her. But don't let JPJ and Haley's potential future distract you from the fact that the person who probably has John Paul Jones' heart is Tayshia.

Haley Ferguson is new to this season of Bachelor in Paradise, but she searched for love there before after she and her twin Emily vied for Ben Higgins' affections on The Bachelor. Haley won't have her sister by her side this time around in Paradise, but she'll quickly bond with JPJ. The BiP Season 6 trailer shows JPJ rubbing sunscreen on Haley and he appears to be into it. Yet, before their date, JPJ was reluctant to be dating anyone but Tayshia.

The Bachelor in Paradise Twitter account posted a video from the Aug. 26 episode where he claims that Tayshia is the one who encouraged him to explore his options in Paradise. "Well, Tayshia. I know what I'm looking for. I'm looking for you. I'm not interested in anyone else, but if you really want me to go on this date, I'll do it," he says.

While it's unclear whether John Paul Jones is talking about his upcoming date with Tahzjuan or Haley in the clip, that may not matter since the point is he's confident in his feelings for Tayshia. So even if JPJ does have a better first date with Haley than Tahzjuan, that doesn't mean he'll give his rose to Haley. Neither JPJ nor Haley have posted anything about each other on social media or spoken to the media about one another. And considering there are clues that JPJ and Tayshia could still be together, it's more likely that JPJ will still want to be with Tayshia after his time with Haley.

Another Tayshia-related indication that JPJ and Haley won't last long is that John Paul Jones was shown fighting for Tayshia in an additional preview. It appears that during Chris and Krystal's wedding, JPJ confronts Derek about trying to date her. JPJ and Derek seem to get in another altercation on the beach about Tayshia again. No signs indicate that Derek and Tayshia will end up together, so this could be further evidence of JPJ and Tayshia's bond.

The point of Paradise is to date around and find who you connect with the best. But dates with multiple people can lead to hurt feelings as JPJ will soon discover during the Aug. 26 episode. Yet, after his time with Haley (and Tahzjuan), John Paul Jones may have even a better idea of how he feels for Tayshia.

More like this
Indian Matchmaking’s Viral Revealed A Major Clue About Her Relationship With Aashay
By Radhika Menon
Everything Jarrette & Iyanna Have Been Up To Since 'Love Is Blind'
By Brad Witter
'Indian Matchmaking's Pradhyuman & Ashima Have Made No Secret Of Their Marital Status
By Brad Witter
Where Is Clayton Echard Now? The Former 'Bachelor' Star Is Dating Susie Evans
By Kadin Burnett
Get Even More From Bustle — Sign Up For The Newsletter