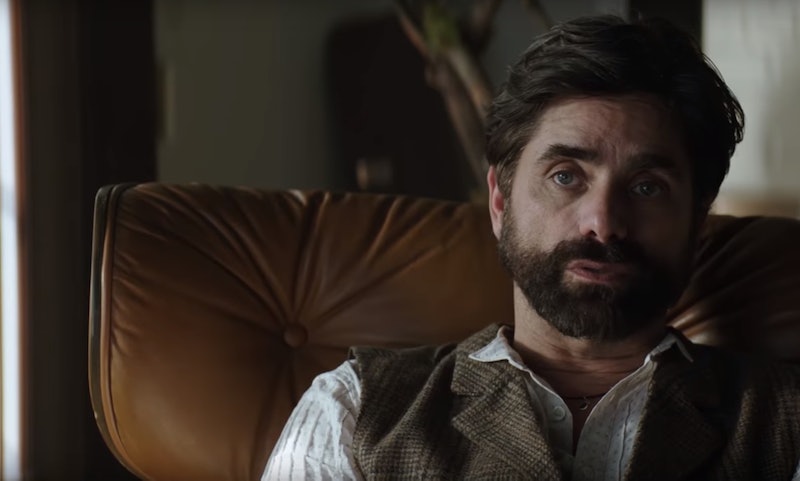 Fans who have been consuming any YOU Season 2 teases possible (where is this premiere date?), listen up, because one important cast member confirmed his appearance in the sophomore season. John Stamos is returning to YOU for its second season, the actor told Entertainment Tonight on Sunday, June 23, and it sounds like he's already filming.

When Stamos was asked about the tattoos on his arm, the Fuller House star confirmed his return to the hit Netflix series. "This is from... I'm on the show, YOU, on Netflix and I play the psychiatrist," Stamos explained. "In the season before, I went to jail, so these are the jailhouse tattoos." The fact that Stamos was donning the tattoos Dr. Nicky would have acquired while behind bars, coupled with the fact that the suspenseful drama is currently shooting Season 2, can only mean one thing: Stamos is heading back to the therapist's couch (or at least encouraging Penn Badgley's Joe to do so) for another few episodes.

For fans of the series, it makes sense that Stamos and his controversial character would come back. Dr. Nicky was the therapist for both Guinevere Beck and Joe Goldberg, so things got a little complicated when Joe discovered his therapist's affair with Beck. (Talk about a patient-doctor conflict of interest, am I right?)

On top of Joe's Season 1 finale murder, he also framed Dr. Nicky for the crime and the murders of Peach Salinger and Benji. So while Dr. Nicky would naturally return to answer for Joe's scheming, it's unclear in what capacity his character will make himself known. Will he still be locked away for the false charges lobbied against him? Or will justice somehow find its way to Joe, who will be residing on the West Coast with a new object of his affection in Season 2.

It's hard to try and predict anything to come in this twisty show's second season. In addition to frequent departures from the source material of YOU in its book series, Dr. Nicky isn't known as an ultra-reliable character. In January, Stamos spoke to Newsweek about his commitment to Dr. Nicky's eccentricities, which includes smoking pot during sessions and developing romantic entanglements to patients. But he opened up about why diving into the role, which is quite a departure from clean-cut Uncle Jesse on Fuller House, was something he feels is prescient to pop culture.

"I think Dr. Nicky falls into what I feel is really in our culture right now and that's not having any consequence," Stamos told the magazine. "Everybody from politicians to people in show business, they think they can do whatever they want and they don't have to pay the price. That's not right. There's consequences to people's actions, and it doesn't seem like anybody cares about that in this show."

Dr. Nicky certainly brings more delicious drama to YOU — so Stamos' confirmation that he'll be returning to the hit series is welcome information. Fans will have to begin developing their own theories about what will go down with him and Joe next.