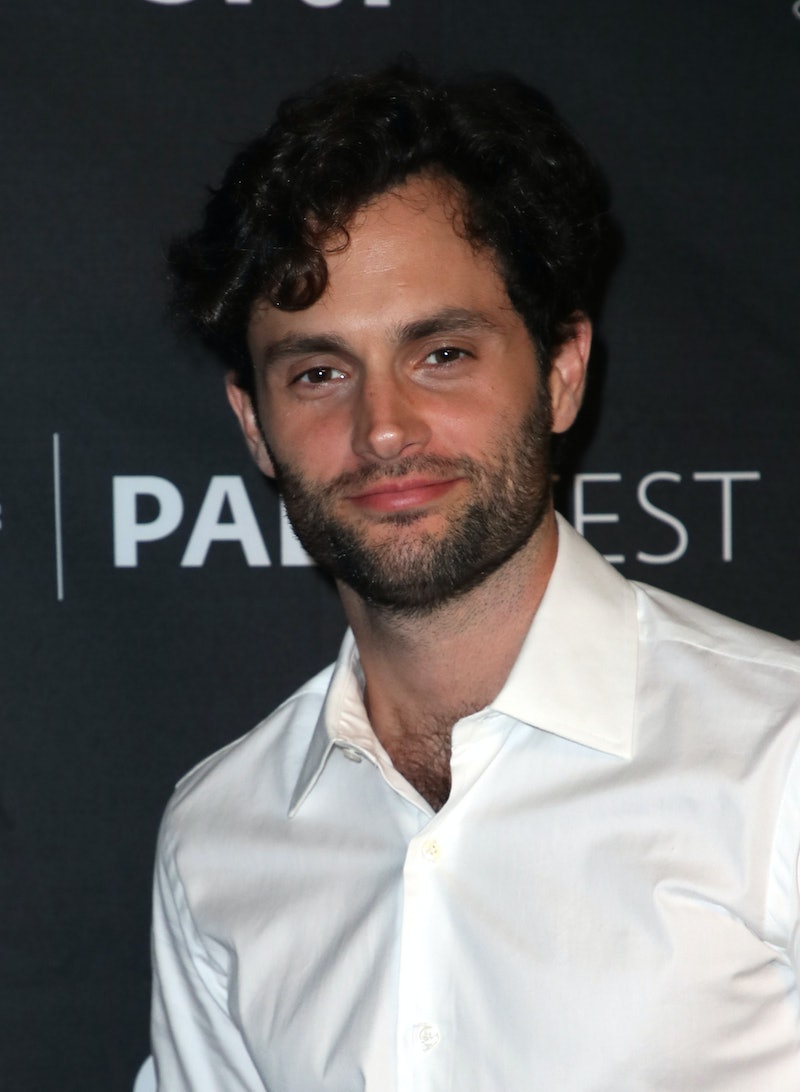 Spoilers ahead for You Season 1. Beware: Joe Greenberg is headed back to your screens soon. On Friday, Feb. 15, Netflix posted a YOU Season 2 table read photo on it's See What's Next Twitter account, signaling that the thrilling drama series is back in production. "And we’re back! First table read for @YouNetflix Season 2!" the See What's Next account tweeted with two photos previewing the two women who just might be super prominent in Joe's life in the second season.

The first photo showcases Penn Badgley (who plays Joe) and Victoria Pedretti, who is playing Joe's new love interest Love Quinn in Season 2 — yes, that's really her name. In the tweet's second photo, Badgley posed with Ambyr Childers, who plays Joe's ex Candace in the series. In both photos, the actors have a script on the table — presumably, for the first episode of the second season — and, if you zoom in on the text enough, it looks like the episode title is, "A Fresh Start."

And indeed, that's what Joe will have in YOU's Season 2, as he moves across the country to sunny Los Angeles. The first season of YOU was based on the novel of the same name by Caroline Kepnes, and Season 2 seems to be partly based on the sequel, Hidden Bodies, which also follows Joe to LA. However, YOU showrunner Sera Gamble recently told Bustle that Season 2 will depart from the book series — notably with the fact that Candace is still — literally — in the picture.

As fans know, Season 1 ended with Joe's thought-to-be-dead ex showing up very much alive. "[Her return] came about for two reasons," Gamble told Bustle. "One is that we like to make life difficult for Joe, and the other is just that people wouldn’t expect it."

In January, Netflix announced The Haunting of Hill House star Pedretti's casting in YOU Season 2 via the See What's Next Twitter account. The tweet described her character Love Quinn as "an aspiring chef who doesn't care about social media. She's also tending to a deep grief — so when she meets Joe she senses a shared knowledge of profound loss."

Gamble told Entertainment Weekly that Love will be different than Joe's previous obsession, Beck, who was murdered by Joe at the end of the first season. "In that way, she’s very very different than the woman that you got to know in season one, Beck, who was ambitious and driven as a writer and also as a young person in a social circle that had a certain kind of status,” Gamble told the publication. "Beck had been quite aware of her social media presence, and Love is extremely disinterested in all of that."

Deadline reported on Friday, Feb. 15 that Gotham star Robin Lord Taylor has also been cast in YOU Season 2 as Will, who "deals unsavory sorts as part of his job, but is himself a thoughtful, personable, and highly intelligent guy who marches to the beat of his own drummer" — but then he gets trapped in an unfortunate situation. Whether or not that situation involves Joe and his fresh star remains to be seen.