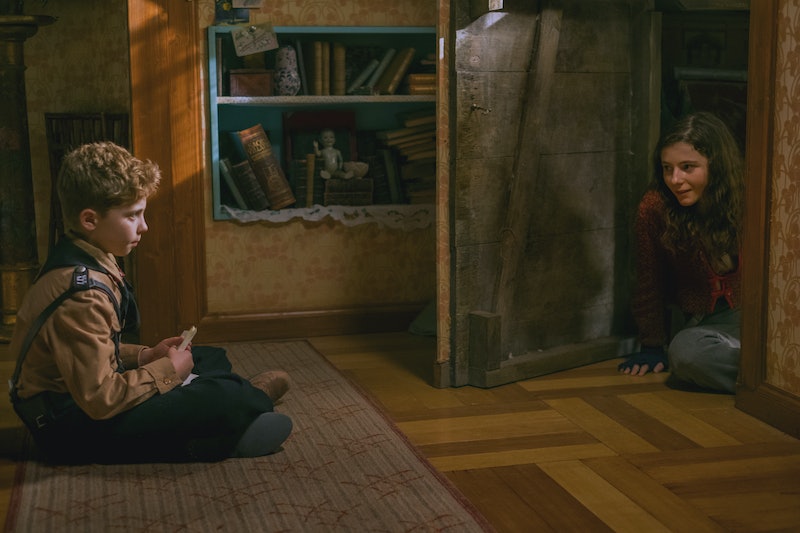 A movie about a 10-year-old German Nazi who has Adolf Hitler as an imaginary friend and a Jewish teenager hiding in his home is going to be divisive. There's no way around controversy with a concept like this, and that's something Jojo Rabbit star Thomasin McKenzie doesn't take for granted. But the 19-year-old actor hopes viewers give writer/director Taika Waititi's Holocaust comedy a chance, because they just might learn something new in seeing a familiar story told from an unfamiliar perspective.

"The goal of this film is to kill hatred with kindness, to laugh at it, and to ridicule it," McKenzie says, speaking by phone ahead of Jojo Rabbit's Oct. 18 release. "You've got to go into it with an open mind and an open heart."

In the movie, inspired by Christine Leunens' book Caging Skies, McKenzie plays Elsa, a Jewish teen who is being hidden in the home of Rosie (Scarlett Johansson) and her son Jojo (Roman Griffin Davis) during World War II. The thing is, Jojo is a passionate Hitler Youth who has a goofy, barely-based-in-reality version of the dictator (Waititi) as an imaginary best friend. He also doesn't know that his mother is part of the anti-Nazi resistance.

Elsa takes full advantage of that fact. After Jojo finds her, she makes up outlandish, nightmarish stories about Jewish people both to scare Jojo and to "help" him write a book he wants to give to the real Hitler, his hero. But, while it's an odd, comedic scenario on one hand and a tragic, all-too-real one on the other, McKenzie related to her character through all the things they do have in common.

"Elsa was a teenage girl, the same age I was when I was filming it," she explains. "And she's going through the same things as I was. She was going through puberty, and she had a crush on a boy, and all that kind of stuff. Although she was, of course, a victim and she was being put through this absolutely disgusting experience that no one should ever have to go through, she was a human being."

Jojo Rabbit has its more somber moments, especially with Elsa, but its tone and approach have been criticized by some. While it won the People's Choice Award when it premiered at the Toronto International Film Festival in September, some reviewers believe that the premise doesn't pay off or that the film doesn't go deep enough, considering the subject matter. It's also been compared to Life Is Beautiful, another divisive film that combines the Holocaust with comedy.

"Everyone’s going to have their own opinions and that's totally fine," McKenzie says. "But I think it's important to look at things that have been talked about a lot of times in a different way and see it from a different perspective, because that helps people to understand things and to think about things in a different way."

In Jojo Rabbit, this means looking at one of the worst atrocities in human history from the perspective of a child, who has been brainwashed into following Nazism. With the film taking place toward the end of the war, Jojo pretty much only knows life under the control of Nazi Germany.

"We don't often think about young German children, what they were experiencing during World War II," McKenzie says. She believes the film is a reminder of the responsibility older generations have when it comes to kids. More specifically, the Leave No Trace actor adds, "If you're someone in power and if you're someone that has a big voice and has the ability to speak and to be heard, then you can't be sharing hatred. You’ve got to be sending out a good message."

For McKenzie, Jojo Rabbit is doing just that, and Waititi is just the person to spearhead the message. "He's just a genius, and he really is able to take subject matters or things that have been talked about a lot and twist them and kind of take a different angle on them," she says of her fellow New Zealander.

The young actor knows the movie is "risky," but the hopeful motivation behind it is what's most important.

"It's a reminder of the monstrous events of the past," she says. "And it serves as a warning that we can't forget and we can't let this kind of thing ever happen again."