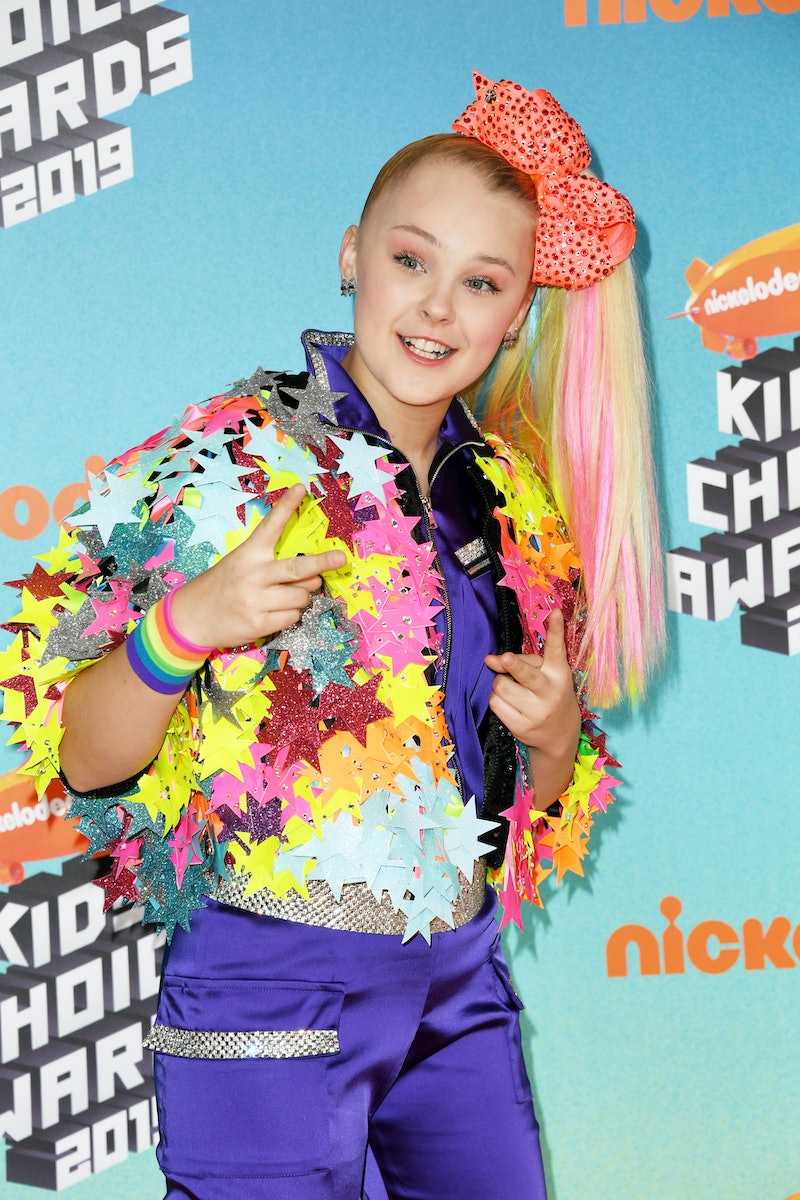 The Kardashian-West family may have found a new babysitter. In a new YouTube video, JoJo Siwa babysat Kim Kardashian's daughter North West, and it looks like the two had a fun day together. North visited Siwa's house to film, and she was so excited to find it decked out with rainbows, glitter, unicorns, and even a gum ball machine. The 5-year-old wore a rainbow gown that matched the decorations, and got to explore the colorful home with Siwa, who's a singer, dancer, and major YouTube star. She had plenty of activities planned for the big day, including hide-and-seek, making glitter slime, and a dance party.

On Sunday, Siwa posted the video on YouTube with the title "BABYSITTING NORTH WEST!!!" In the video's caption, she revealed that the two had a blast during their hangout. She wrote,

Kim Kardashian makes a cameo in the video as well, dropping off and picking North up at the home. Before her mother left, Siwa assured North the day would be a blast. "Are you ready for a fun day?" she said. "We're going to have the best time ever."

North is a major fan of Siwa, and the collaboration had been the works for a while. In February, Kardashian tweeted that North loved Siwa's videos, writing, "LOL @ North’s bow. She is obsessed with @itsjojosiwa." Siwa responded on Twitter, writing, "Omg!! Yesss I love it! I wanna send her some special ones!! DM me!" with plenty of heart emojis.

According to E! News, the reality star did reach out via Twitter, and North and Siwa met on FaceTime. Kardashian discussed the call on Twitter on March 16. She wrote, "North just FaceTimed @itsjojosiwa and her life is made!!!!!! That was the cutest thing ever seeing North soooo excited! Especially when she saw her dog bowbow."

Siwa and Kardashian stayed in touch after the Twitter exchange, and the social media star set up a date to film the special video. Siwa originally planned to surprise Kardashian's daughter at home, but apparently North really wanted to visit Siwa's colorful house. On March 21, Siwa teased the YouTube video, revealing to fans that Kardashian would make a cameo as well.

On Saturday, Siwa previewed the YouTube video on Instagram, sharing a picture posing with Kardashian and North. She captioned the photo, "You guys are not ready for this video! TOMORROW 12:00 PST! Filming this video 'Babysitting North West' was SO MUCH FUN! The video is hilarious and I can’t wait for you all to see it!" Then on Sunday, the "D.R.E.A.M." singer shared how much she enjoyed working with Kardashian and North on Instagram. She wrote,

"I had so much fun getting to film with North and @kimkardashian. Seriously North is SO adorable and awesome, and Kim is one of the SWEETEST people ever! You guys are going to love the video!!!"

Siwa's collaboration with North is just the latest exciting career moment for the social media star. In March, Siwa won Favorite Social Music Star award at the Nickelodeon Kids Choice Awards, as per Variety. In the spring, she will embark on the JoJo's D.R.E.A.M. tour, which will visit cities across the United States.

In the YouTube video with North, Siwa gifted the whole Kardashian-West family tickets to the show. North was super excited for the concert, which will definitely be an opportunity to dance and wear even more hair bows.