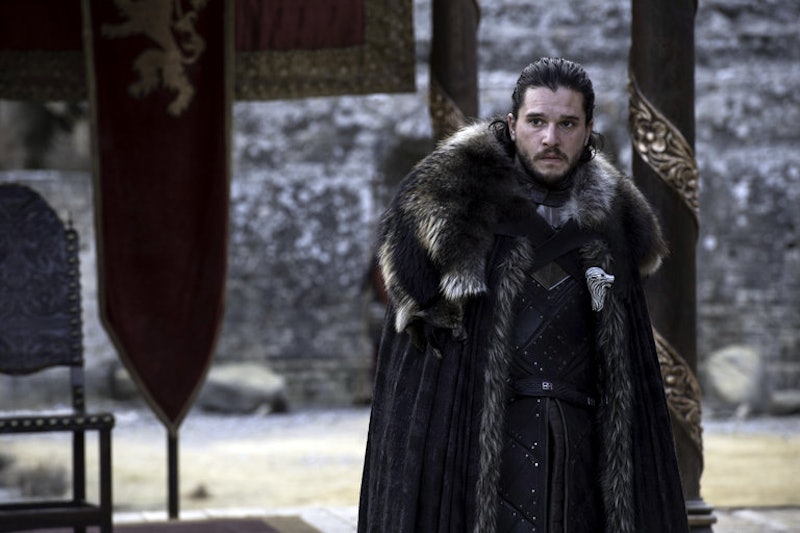 There were many important moments packed into Game of Thrones' gigantic 79-minute Season 7 finale, but perhaps the most important was the full reveal — finally — of Jon Snow's parentage and real name. Spoilers ahead! He's not Ned Stark's bastard, but the trueborn son of Rhaegar Targaryen and Lyanna Stark. And his name isn't Jon Snow, it's Aegon Targaryen. And with that reveal, the show basically confirmed that Jon Snow's real name proves he's Azor Ahai.

Azor Ahai was a legendary savior of the Seven Kingdoms, the one who saved Westeros from the White Walkers during the Long Night thousands of years ago. And while he's only been mentioned briefly in the TV series, his presence in the A Song of Ice and Fire book series is much more prevalent. A prophecy predicts that Azor Ahai will be reborn to defeat the White Walkers when they return, and Jon Snow's rebirth after his death in the Season 5 finale already made him a leading candidate to be the resurrected warrior. Another prophecy that is believed to be a different interpretation of the Azor Ahai legend is "The Prince that was Promised" prophecy, and the evidence in this prediction is what really makes it seem certain that Jon, AKA Aegon, is the foretold hero.

With his name being Aegon Targaryen, that makes Jon Snow a prince, which one would expect to be a prerequisite for being the Prince that was Promised (though it could be a princess since the Old Valyrian word for prince is non-gender specific). Plus, the name Aegon is a significant one in the history of Game of Thrones. A number of Targaryen Kings were named Aegon in honor of the first, Aegon the Conqueror, the man who united the Seven Kingdoms of Westeros. Oddly enough, it was also the name of Rhaegar Targaryen's first son with Elia Martell, the one whom The Mountain killed in the sack of King's Landing during Robert's Rebellion.

It seems strange that Rhaegar would name both of his sons Aegon, but since Rhaegar was already dead by the time the second Aegon was born, it may have been Lyanna who named Aegon II. Rhaegar had strongly believed that his son was the Prince that was Promised and that the name Aegon held significance, and since the first son didn't turn out to be the legendary hero, Lyanna may have named her son Aegon in the hopes that he would fulfill the prophecy that meant so much to her late husband. It looks like she got it right.

There are a number of other specifics from the prophecy that fit Jon's life when interpreted as metaphors, though the same can be said of Daenerys as well (born from salt and smoke, yada yada yada). But one specific of the prophecy that fits Jon and Jon only is the line that the Prince that was Promised has a "song of ice and fire." Being half-Stark and half-Targaryen, Jon embodies both ice and fire, something no one else in the series can claim.

While nothing has been proven yet, the reveal that Jon Snow's real name is Aegon Targaryen offers further proof that he is indeed the Prince that was Promised, Azor Ahai, and fans will find out for certain next season when he defeats the White Walkers.