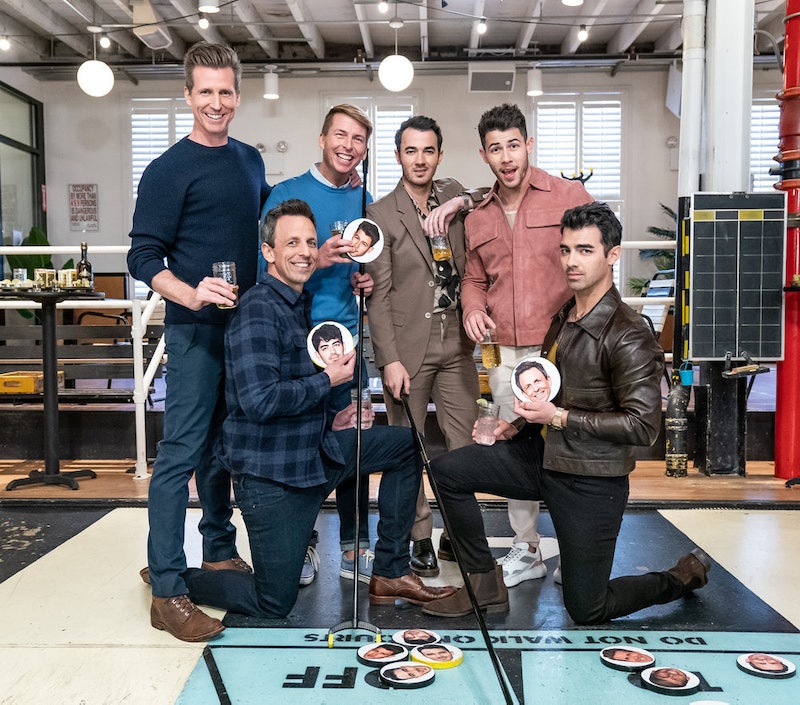 Getting paid to drink with celebrities sounds like an ideal job, especially when Kevin, Joe, and Nick Jonas are involved — oh, to be Seth Meyers. The Jonas Brothers went day drinking with the Late Night host, his younger brother, Josh Meyers, and his "brother in case of emergency," Jack McBrayer. The Late Night With Seth Meyers segment resulted in a handful of inebriated moments, but most importantly, a new original JoBros song. (Though don't expect this one to be on Spotify any time soon.)

After drinking a few rounds of questionable mixed drinks, each group of brothers (plus McBrayer) picked a title out of a bucket and had to create a pop song in five minutes. The Jonas Brothers' song was called "In Bed by Nine," and Seth, Josh, and McBrayer's was titled "Drunk at Noon." Despite not being song writers or singers, Seth's team did pretty well under the circumstances. They even managed to slip in the lyric, "Everything's good with my penis," which should earn them a prize of some sort.

As for the JoBros, well, their fans never heard them sing such a NSFW song. Their jam included multiple sexual references, with Nick crooning, "Do you want to 69?" Safe to say the JoBros' interpretation of the phrase "In Bed by Nine" is definitely not going to sleep early.

In addition to their day drinking, the Jonas Brothers collaborated with McBrayer for a new iconic TikTok. In a video shared on Jan. 21, they recreated a Camp Rock scene from their 2008 Disney Channel Original Movie. While sporting some unforgettable wigs, Joe once again channeled his character Shane Gray, while Nick and Kevin, took on Nate and Jason Gray, respectively, to recreate the scene when Shane is dropped off at Camp Rock.

They certainly do the DCOM justice, but what makes the video even better is McBrayer is in the front seat as the brothers' driver. Seeing as how McBrayer wasn't originally in Camp Rock, it seems likely he filmed the TikTok around the same time all four went day drinking with Seth.

For even more TikTok gold, Joe shared a second video as Shane, with the very emo caption, "LeAvE sHaNe AlOnE." Sorry, Joe, as long as you keep TikToking, we won't stop watching.